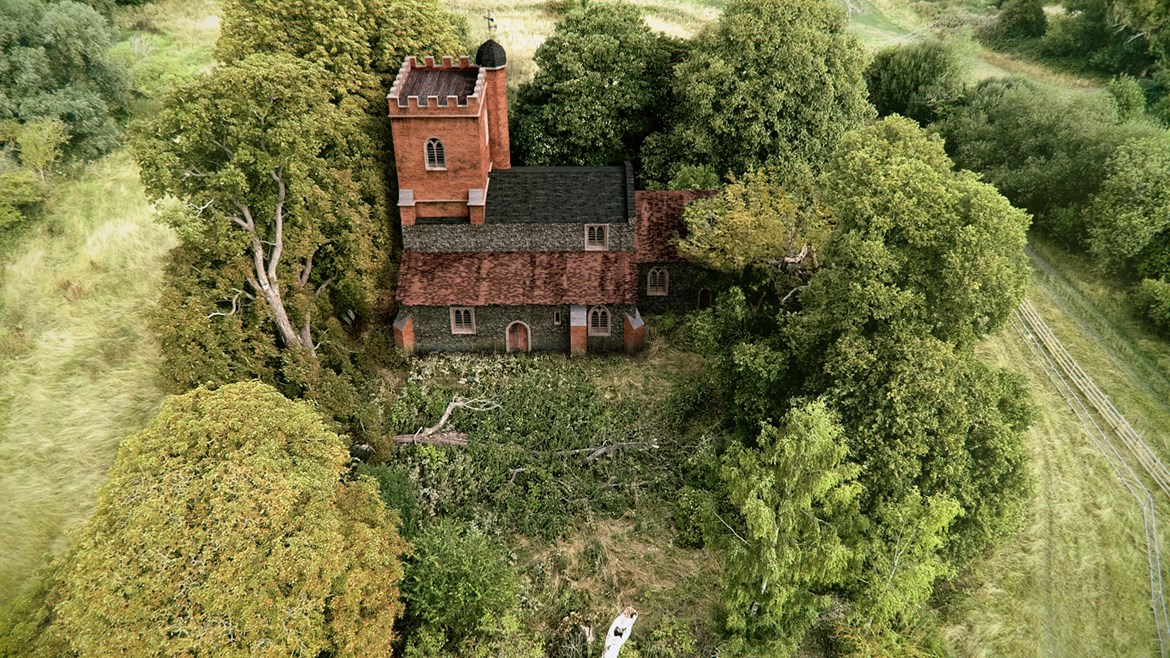 Archaeologists working on the HS2 project have made an exciting discovery, uncovering what they believe to be the remains of an Anglo-Saxon church underneath the structure of the Norman church they were excavating.

The team at St Mary’s Old Church, Stoke Mandeville, were thrilled at the find and say to find a structure that had survived to such an extent was “truly remarkable”. The site sits on the line of the new HS2 route and is being carefully investigated by a team from LP-Archaeology, working with HS2’s enabling works contractor, Fusion-JV.

Over the past few months, a team of over 40 archaeologists have been excavating and examining the Norman church and associated churchyard. The church structure was built on a light grey compacted foundation band laid by the Normans, so any archaeological deposits found below that band would be pre-Norman.

The team working at St Mary’s discovered flint walls forming a square structure underneath the Norman levels, enclosed by a circular boundary ditch, and a small number of associated burials. Archaeologists believe this to be an Anglo-Saxon church.

“This is a fantastic discovery that we are all very excited to excavate. The work undertaken at Old St Mary’s is a unique archaeological opportunity to excavate a medieval parish church with over 900 years of meaning to the local community. It also gives us the opportunity to learn more about the community that used the church and to understand the lives they lived.

“To then find an earlier structure beneath the Norman church is outstanding. To have so much of it remaining, including the walls and even some flooring, will provide a great deal of information about the site prior to the construction of the Norman church in 1080AD. The discovery of this pre-Norman, possible Saxon Church is a once in a career opportunity for archaeologists and will provide a much greater understanding of the history of Stoke Mandeville.”

Adding to the intrigue around the discovery, the foundations of the pre-Norman structure have reused Roman roof tiles in them. There is evidence of a nearby Roman settlement so it is possible that the materials were reused from a previous structure away from this location, although archaeologists are hoping that evidence of an even earlier structure could be found.

“Once again, our vast archaeology programme has given us the ability to reveal more about the history of Britain. The discovery of a pre-Norman church in Stoke Mandeville allows us to build a clearer picture of what the landscape of Buckinghamshire would have been like over 1000 years ago.

“All artefacts and human remains uncovered will be treated with dignity, care and respect and our discoveries will be shared with the community through open days and expert lectures. HS2’s archaeology programme seeks to engage with all communities both local and nationally to share the information and knowledge gained as well as leaving a lasting archival and skills legacy.”

Following the Norman conquest, there was a significant church building programme across England from parish churches to larger city cathedrals. It wasn’t uncommon for some of these to be built on top of Saxon ruins – but it is rare to have the opportunity to excavate and examine them in this way as many did not survive the vast Norman architecture.

The church originally being excavated by HS2 archaeologists was St Mary’s Church in Stoke Mandeville which was built in 1080AD, very shortly after the Norman conquest. It had been renovated in the 13th, 14th and 17th centuries, and played a central role in the community, furnished with a variety of extensions and the construction of a brick bell tower. A new church closer to the centre of the village was built in the 1880s, and at that point the Norman church fell into disrepair and in the 1960s the Royal Engineers were drafted in to pull it down.

At this unique site, archaeologists have the rare opportunity to excavate and understand the history of this building, how its use and meaning changed over time and what it meant to the community of Stoke Mandeville. The discovery of this evidence of pre-Norman, potentially Saxon, activity on the site adds further to the 900 years of history that the team were expecting to uncover.

The team have also been carefully excavating the buried population at the Old St Mary’s Churchyard, examining what life would have been like for a rural population who lived in the area over the period the Norman church was in use. Evidence for funerary practices such as when a plate of salt was placed on the deceased have been discovered. Similar finds were uncovered by HS2 archaeologists excavating a city burial site in Birmingham.

A further unusual find at St Mary’s was a ‘flea catcher’ found buried with a gentleman, next to his head. The ‘flea catcher’ was a small bone pot which would have contained a rag with blood on it, and a bit of honey. Fleas from the gentleman’s wig would have been attracted to the blood on the rag and would stick to the honey inside the pot.

The team at Stoke Mandeville have already begun sharing the findings from the archaeological dig through a series of open weekends at a field museum which has been set up on the site of Old St Mary’s Church. So far almost 1,300 people from the local community have visited the museum. Following HS2’s involvement in this year’s Heritage Open days, an extra Field Museum Open Weekend will be held on Saturday 25th and Sunday 26th September. Visitors will be able to see some new displays and talk to the archaeologists about the finds from the excavation of the pre-Norman structure.