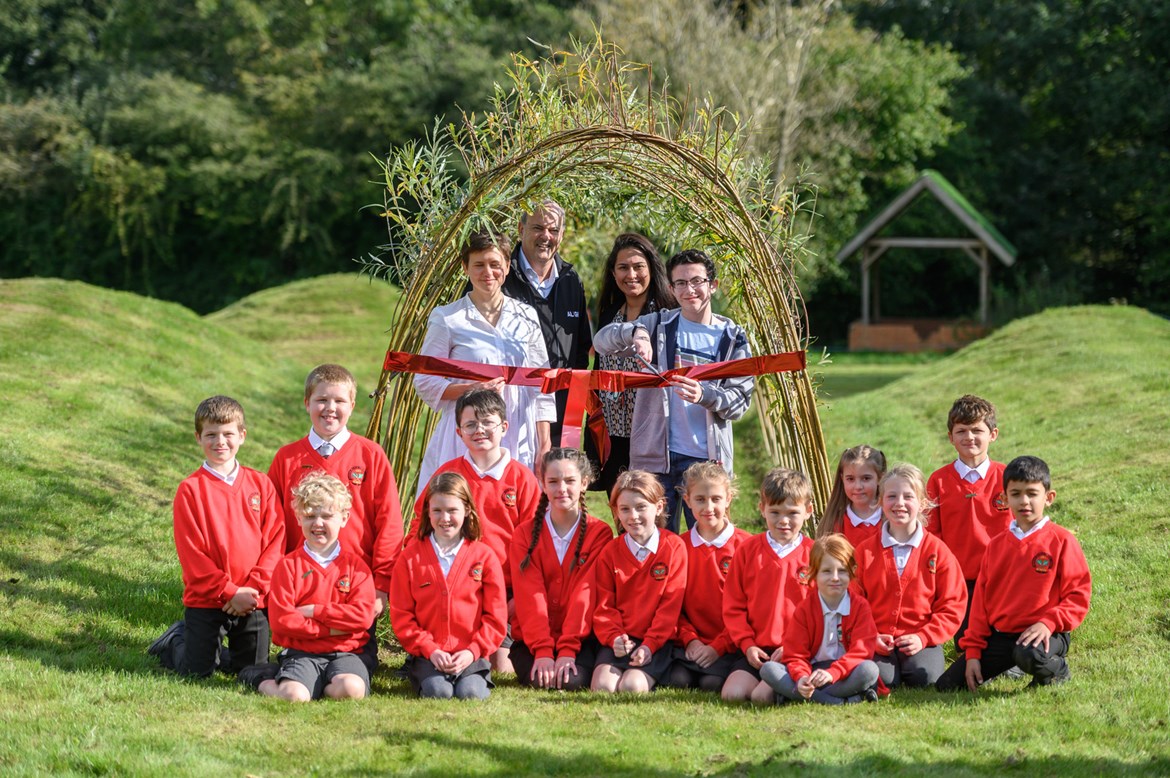 A new artist-designed play area, commissioned by HS2 Ltd, has been opened at Rickmansworth’s Maple Cross JMI school. Created from soil excavated from the high speed railway’s Chilterns Tunnel it has been built by contractor Align, the joint venture delivering the Central 1 portion of HS2 Phase One.

The initiative was sparked after a Year Six pupil wrote to HS2 asking whether soil from the nearby project works could be donated to create a new hill for him and his school mates to roll down.

In response, HS2’s Arts and Culture team commissioned artist and landscape designer, Emily Cropton, who worked with the pupils to develop a design for the new play area that would also help them to connect with their area’s natural history and to see how they have a role in it.

Built on part of the school’s playing field, the new play area’s central feature is five rolling hills, built by Align and its contractors with 1,000 tonnes of soil. It also includes apple, pear, plum and cherry trees to connect pupils with the changing seasons, a ‘fallen forest’ of balancing logs and a tunnel of woven willow saplings.

To help the children comprehend the long history of the Chiltern Hills and Colne Valley, their new play area also includes boulders, similar to those deposited in the area during the last Ice Age. A cutting lined with hand-made bricks in one of the newly made hills reveals “fossils of the future”. The children developed the designs with Emily, bringing to life their ideas of what today’s geological footprints could look like in millions of years’ time.

Pupils were joined by Align project director, Daniel Altier and Emily Cropton to cut a ribbon and open the area for children to play on.

“Align is very pleased to have been involved in this unique project, working with our local supply chain contractors. What we have delivered is a legacy for the children in the local area that will hopefully inspire the next generation of engineers. It has been a pleasure to work with the school, and its governors to deliver Emily’s wonderful design.”

“I am really delighted to see this wonderful project come to fruition. It is a great example of how HS2’s arts and culture programme adds value to the project. By creatively recycling construction material, Emily Cropton has worked with the children to think about spaces for play, the seasons and the environment. She has responded to their ideas by designing an inspiring and extraordinary natural play area.”

“We’re really grateful to the whole HS2 team for their efforts to deliver this new play area for the children. We know they’ll be so excited to play on it, but also have the opportunity to ask questions and think about what it says about their environment and how it has changed over time.”

“It’s been a real pleasure to work with the children and staff at Maple Cross School. The area’s rich geological history provided a very relevant starting point and the project has created an opportunity to engage the children in developing their area in a way that which leaves a legacy for the school. As a living landscape, the orchard, meadow, living willow tunnel and grassland will evolve over time to create a rich play and learning environment.”