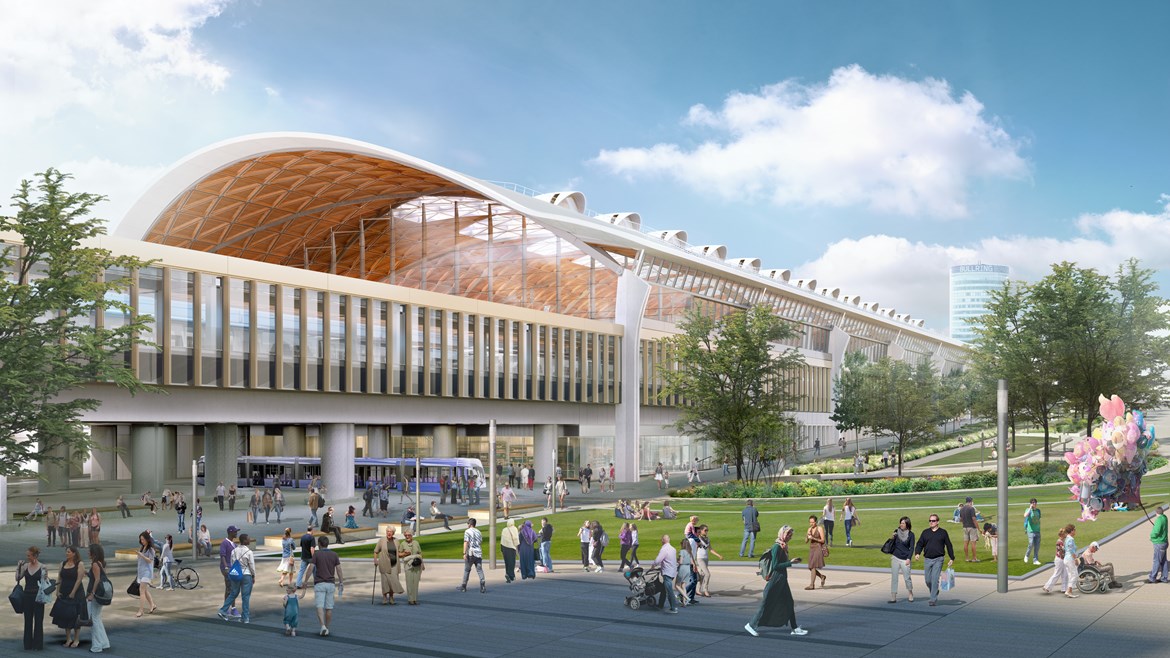 At the heart of the high speed network, the new HS2 station in Birmingham has been designed to allow for future improvements to the public space to ensure inclusive, seamless transport connections for local people, provide opportunities for retail and commercial development, and help drive local investment and regeneration.

The West Midlands Metro Eastside extension, between Bull Street and Digbeth, will better connect HS2 to wider Birmingham and the Black Country through the tram network.

To facilitate this ambition, HS2 and WMCA have developed joint plans to ensure the utility diversions needed around the new HS2 Curzon Street station will future-proof the area for the city’s tram extension. The utility diversions, being carried out by HS2’s enabling works contractor LMJV (Laing O’Rourke and J. Murphy & Sons Joint Venture) over the coming year form part of the preparation work for the station.

The plans will lay the foundations for the new route to serve the HS2 station as well as providing connections with New Street, Moor Street and Snow Hill railway stations. The Birmingham Eastside Metro extension, along with a number of others, is being planned, designed and delivered by the Midland Metro Alliance on behalf of Transport for West Midlands (TfWM).

“We’re extremely pleased to reach this agreement with WMCA, and will continue to work with them and our other partners, including Birmingham City Council, Transport for the West Midlands, Midland Metro Alliance and Network Rail to ensure that HS2 delivers additional benefits to Birmingham and the wider region.

“HS2 is already playing a pivotal role in helping Britain’s economic recovery, with 7,000 jobs being created in the Midlands as the project moves into construction. It is also crucial to the country’s low carbon future by providing a cleaner, greener way to travel, helping to cut the number of cars and lorries on our congested roads.”

“This agreement with HS2 shows that we are preparing the ground to ensure we are ready to begin construction of our Eastside Metro extension in the New Year. This extension, which will run through Digbeth and the new HS2 Curzon Street Station, is not only part of our wider transport plan for the region, but it will also help create and protect jobs at a challenging time for our economy. The benefits to people both short and long-term will be immense, and it is critical we now press on with the construction.”

HS2’s Curzon Street station in Birmingham city centre, which was granted planning permission earlier this year, will be the first brand new intercity terminus station built in Britain since the since the 19th century. Eventually, there will be nine trains per hour onto the high speed network in each direction from the station.

Designed by a team in Birmingham, the station is set to reduce carbon emissions by an unprecedented 55%, will achieve net zero carbon emissions from regulated energy consumption and use a range of technologies to generate energy from renewable sources. The design has recently been validated through the BREEAM Excellent rating, which is an industry recognised standard for buildings that reduce energy usage and materials waste, and minimise impact on the natural environment.