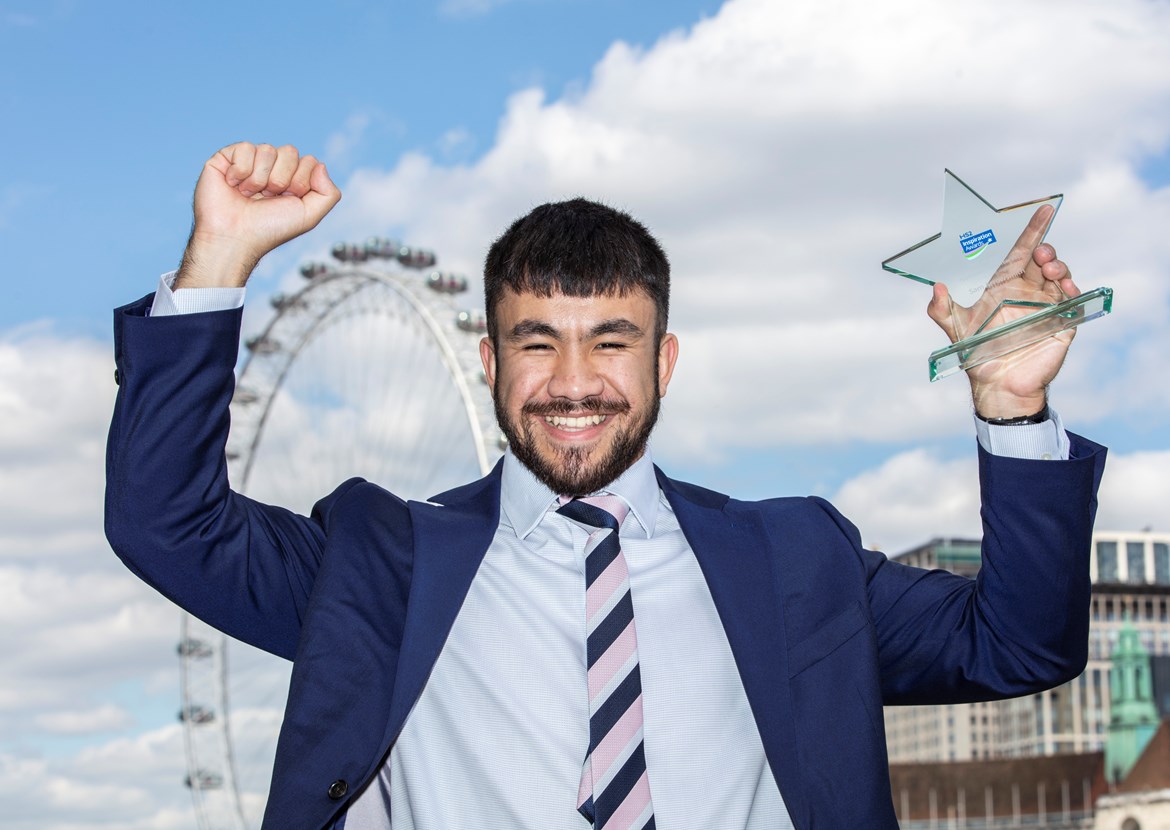 21-year-old Sam Arrowsmith from Stratford upon Avon has been crowned HS2’s Apprentice of the Year at an awards ceremony held at the Houses of Parliament today (Monday 4 July).

Sam joined HS2, the company building Britain’s new zero carbon railway, in September 2020 and his ‘enthusiasm and constant pursuit of excellence’ led to him being recognised as a rising star on the project by HS2 Minister, Andrew Stephenson.

Sam began his Level 4 Associate Project Management apprenticeship at the height of the Covid pandemic, a difficult time for a young person to be starting out in their career, but he didn’t let that faze him and instead relished the opportunities it presented.

With major construction projects given the green light to continue during lockdown restrictions, Sam seized the opportunity to play a leading role in HS2’s ‘Back to Better’ group, which implemented measures to ensure the thousands of people supporting HS2’s construction remained safe. He has since worked alongside senior leaders and HS2’s construction partners, to write a Learning Legacy paper, sharing details of the good practice measures that were put in place, so that major infrastructure projects of the future can benefit from the lessons learned.

Sam’s dedication to the ‘Back to Better’ project didn’t detract from his day to day role in project management, so much so that he completed his two-year apprenticeship six months early and achieved the highest pass rate – 89% - amongst his fellow 2020 cohort.

On presenting Sam with the Apprentice of the Year award, HS2 Minister Andrew Stephenson said:

It's an honour to be here today, as HS2 Minister, to celebrate the extraordinary achievements of those dedicated to bringing this landmark project to life. Sam has achieved a huge amount in his short career. With his passion and enthusiasm he'll go far, and I'm confident he'll inspire others to step forward and play a part in this transformational project."

Achieving excellence outside of his day-to-day role remains a constant driver for Sam, who also spends time volunteering with HS2’s education team. Eager to inspire the next generation to consider a career in construction and rail engineering, Sam has returned to his own sixth form college, Alcester Grammar School and secondary school, Studley High School, where he hopes to inspire others to consider an apprenticeship on HS2.

On receiving his award from the HS2 Minister, Sam said:

“It's a real honour to be recognised today and I'm so proud to have won this award. The last two years have flown by and now that I've finished my apprenticeship, I can't wait to get started in my new role as assistant project manager. HS2 has really opened doors for me and I'm so proud to be part of the team that is building HS2 in my home county of Warwickshire."

Sam was one of two apprentices hailed for their outstanding contribution at today’s Inspiration Awards, which recognise the achievements of individuals and organisations supporting the construction of Britain’s new railway. Sam was the overall winner in the Apprentice of the Year Level 4 and above category, which celebrates the achievements of those starting out in their career on HS2.