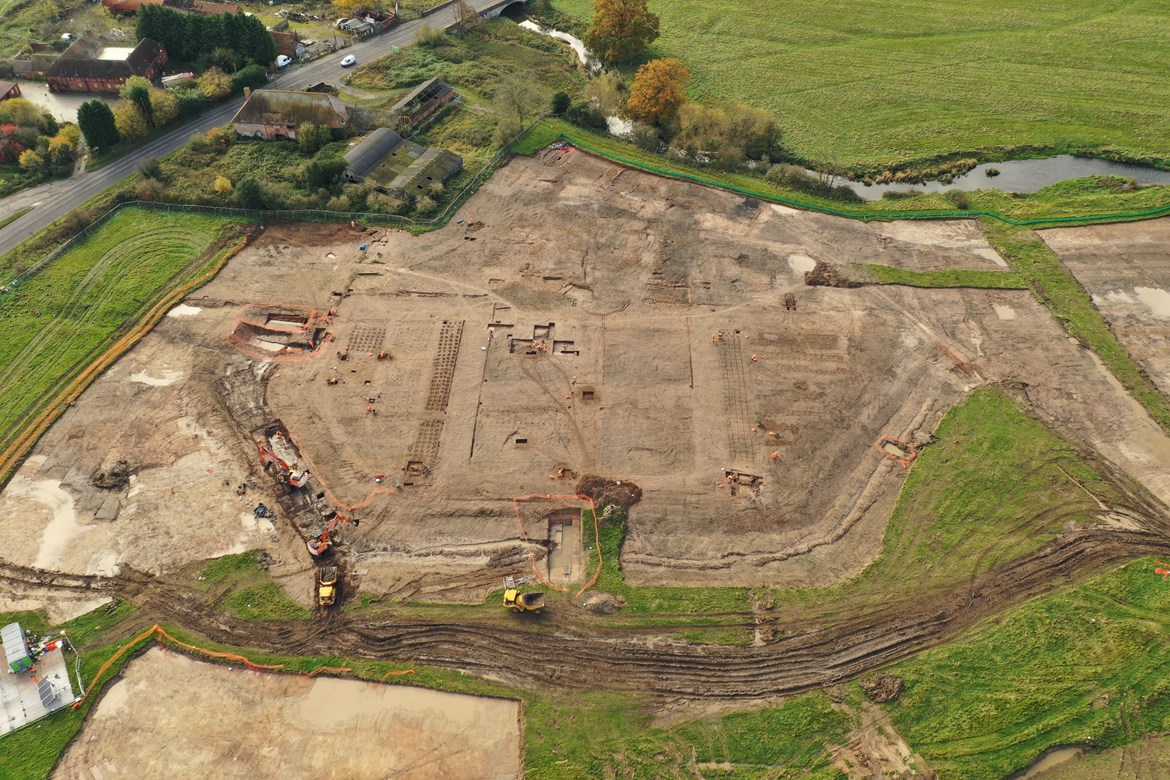 Excavations undertaken by Wessex Archaeology for LM (a joint venture of Laing O’Rourke & J. Murphy) on the HS2 site at Coleshill in Warwickshire have revealed one of the best preserved late 16th century gardens ever discovered in this country.

During archaeological investigations, the remains of Coleshill Manor and an octagonal moat were originally picked up by air photography. As excavations progressed, the remains of a massive garden dating from the decades either side of 1600 were discovered, alongside the impressive manor house.

The house was owned by Sir Robert Digby, and experts now believe that after marrying an Irish heiress, he built his home in the modern style, along with huge formal gardens measuring 300 metres from end to end, to show off his new wealth and status.

Entirely unknown before, the preservation of the gardens is exceptional, with well-preserved gravel paths, planting beds, garden pavilion foundations and ornaments organised in a geometric pattern. The site has parallels to the impressive ornamental gardens at Kenilworth Castle and Hampton Court Palace.

“It’s fantastic to see HS2’s huge archaeology programme making another major contribution to our understanding of British history. This is an incredibly exciting site, and the team has made some important new discoveries that unlock more of Britain’s past.”

“For the dedicated fieldwork team working on this site, it’s a once in a career opportunity to work on such an extensive garden and manor site, which spans 500 years. Evidence of expansive formal gardens of national significance and hints of connections to Elizabeth I and the civil war provide us with a fascinating insight into the importance of Coleshill and its surrounding landscape.

“From our original trench evaluation work, we knew there were gardens, but we had no idea how extensive the site would be. As work has progressed, it’s been particularly interesting to discover how the gardens have been changed and adapted over time with different styles. We’ve also uncovered structures such as pavilions and some exceptional artefacts including smoking pipes, coins and musket balls, giving us an insight into the lives of people who lived here.

“The preservation of the gardens is unparalleled. We’ve had a big team of up to 35 archaeologists working on this site over the last two years conducting trench evaluations, geophysical work and drone surveys as well as the archaeological excavations.”

“This is one of the most exciting Elizabethan gardens that’s ever been discovered in this country. The scale of preservation at this site is really exceptional and is adding considerably to our knowledge of English gardens around 1600. There have only been three or four investigations of gardens of this scale over the last 30 years, including Hampton Court, Kirby in Northamptonshire and Kenilworth Castle, but this one was entirely unknown. The garden doesn’t appear in historical records, there are no plans of it, it’s not mentioned in any letters or visitors’ accounts.

“The form of the gardens suggest they were designed around 1600, which fits in exactly with the documentary evidence we have about the Digby family that lived here. Sir Robert Digby married an Irish heiress, raising him to the ranks of the aristocracy. We suspect he rebuilt his house and laid out the huge formal gardens measuring 300 metres from end to end, signifying his wealth.”

Coleshill is an historic market town on the south east side of Birmingham. The documentary evidence of the manor, known as Coleshill Hall, and its previous occupants point towards a great feud between the de Montfort and Digby families. The Hall came into the hands of Simon Digby in the late 15th century and the change of ownership set in motion huge alterations to the landscape around Coleshill and the development of the Hall, including a deer park and the formal gardens in the 1600s.

Excavations have revealed structures dating to the late medieval period, with structural evidence attributed to the large gatehouse in the forecourt of the Hall with its style and size alluding to a possible 14th or 15th century date. In a detailed inventory of the house undertaken in 1628, the gatehouse is specifically mentioned, further historical sources suggest that it was not long after this that the gatehouse was pulled down.