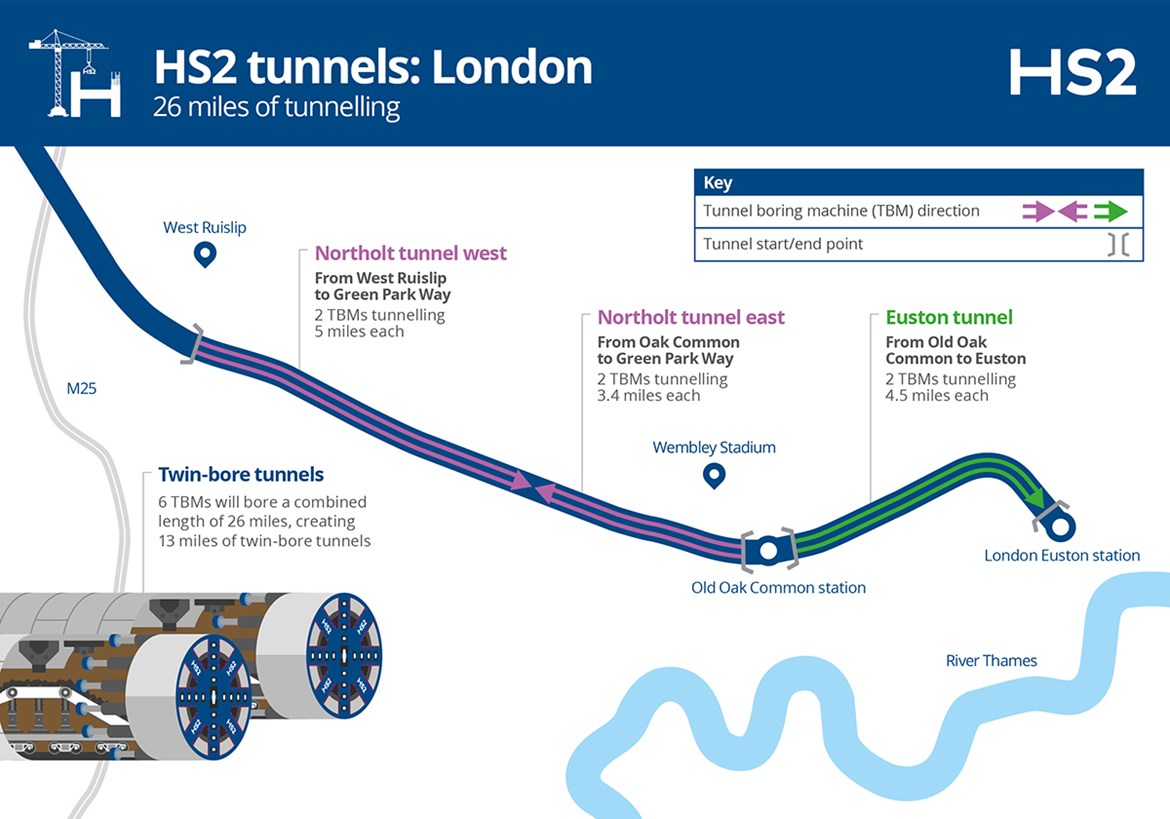 The tunnel boring machines (TBMs) are being built by world leading manufacturer Herrenknecht and will be delivered to the site in the UK by the end of 2021. They are being designed and manufactured specifically for the London clay and chalk ground conditions they will bore through.

The London tunnels for HS2 are twin bored, and will be 13 miles each way, and with a combined total of 26 miles, our London tunnel's will be the same length as Crossrail. This programme of tunnelling between central London and the M25 will be undertaken by SCS JV. Overall there will be 10 TBMs purchased to construct the 64 miles of tunnelling along the HS2 route between the West Midlands and London.

The London tunnels will begin just outside of Euston station and will be below ground until they emerge in West London at Old Oak Common station. The route will continue underground from Old Oak Common to the outskirts of West London.

“HS2’s London tunnels will help ensure many homes and habitats in the capital remain undisturbed. This is a key part of our commitment to deliver Britain’s new high speed railway in the most environmentally-friendly way and minimising disruption to our neighbours.

“Building HS2 will showcase Britain’s world class capabilities in tunnelling. The procurement of these incredible machines is an exciting step towards the construction of the London tunnels, which will involve them working 24 hours a day, seven days a week.”

These first two London TBMs will be launched from a portal at West Ruislip and will travel 5 miles east, creating the western section of the  Northolt Tunnel. Once they arrive at Green Park Way in Greenford the machines will be extracted from the ground and the site will then be used as a vent shaft. The 8.4 mile tunnel will be completed with a 3.4 mile tunnel drive from Old Oak Common using two further TBMs which are yet to be procured. A second tunnel between Euston and Old Oak Common will complete the remaining 4.5 miles of London tunnel between the two HS2 stations.

Once the first new TBMs have been built, they will be transported by sea before being delivered to site at the end of 2021. Once assembled, they will begin the tunnel drive from mid 2022, until completion at the beginning of 2024.

As the construction partner responsible for the majority of tunnels on the HS2 project, our contract for the first two TBMs is a major milestone for us. This partnership with Herrenknecht has brought together leading expertise in both our organisations and together we are constructing some of the most advanced TBMs in the world to efficiently drive the tunnels under London.

Work is already well underway to prepare for the first tunnel launch in 2022. Throughout these and all our activities we are committed to involving local communities and stakeholders and supporting social development and employment through the 4,500 jobs that will be created.

“We feel honored to be part of the epoch-making HS2 project and especially to work with the SCS Joint Venture. Our two Herrenknecht machines will be specially and innovatively designed for this project, excavating the Northolt Tunnels West.”

Some key facts about these giant machines:

Earlier this year, HS2 revealed images of two TBMs that have been made to construct the tunnels through the Chilterns. The names of the machines were suggested by local schoolchildren and subject to a public vote with Florence and Cecilia being the chosen names. The process for naming the first two London tunnelling machined will be revealed in due course.