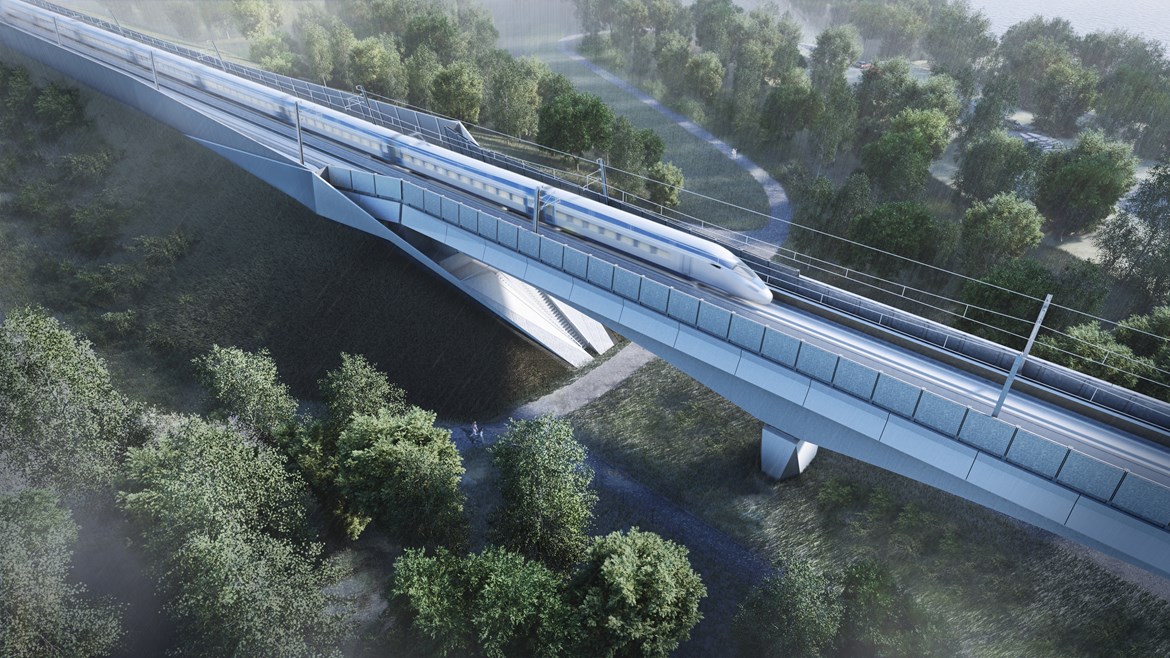 HS2 today [Monday 15th November 2021] confirmed that it is on track to cut the amount of embedded carbon in the Colne Valley Viaduct by at least 28.4%, as works continue for what will be the UK’s longest railway bridge.

Applying lessons from the construction of the latest European high speed railway bridges, the British team has cut the amount of embedded carbon in the viaduct by 63,300 tonnes CO2e – the equivalent of 234,500 flights from London to Edinburgh.

The production of concrete and steel are major sources of CO2 emissions, so narrowing the width of the viaduct allowed a significant reduction in carbon, and helps reduce disruption for local residents by reducing the number of HGVs on local roads.

Inspired by the flight of a stone skimming over the surface of the water, the Colne Valley Viaduct will stretch for 3.4km across a series of lakes on the outskirts of London, and will be one of the most high-profile structures on the new HS2 high speed rail link under construction between London, the West Midlands and Crewe.

HS2 Ltd’s main works contractor Align JV – a team made up of Bouygues Travaux Publics, Sir Robert McAlpine, and VolkerFitzpatrick – worked for four years on the design with architects Grimshaw and design partners Jacobs and Ingerop-Rendel.

Starting from the reference design produced as part of the HS2 parliamentary process, they refined the design, challenged assumptions, and found efficiencies to help reduce the amount of steel and concrete in the structure.

This included working closely with rail systems experts at HS2 Ltd to allow the structure to be narrowed by over 1m, while still allowing sufficient space for signalling and control equipment alongside the line. They also worked to bring the northbound and southbound tracks closer together further north, which in turn significantly reduced the amount of earthworks required for the approach embankment.

Conscious of commitments made to the community about the appearance of the viaduct as it passed over the lakes, the team focused on creating long graceful arches over the water while reserving simpler, easier to construct, designs for the approaches. Inside the viaduct, the engineers opted for a ‘post-tension’ design, with lightweight super-strong steel cables running the full length of structure.

The cables will be monitored 24/7 by a network of high-tech sensors and act to bind the viaduct together allowing it to handle the enormous forces produced by trains passing at speeds of up to 200mph (320km/h). This combination of steel and concrete allows for the most efficient use of the materials and the low elegant profile of the viaduct.

Every element of the design was challenged during the design process, with noise barriers moving from solid concrete to a composite design with noise absorbing steel cassettes at the bottom and transparent acrylic at the top, helping to reduce the amount of concrete while also reducing the visual weight of the structure and enabling views across it.

An extensive programme of test piling was also completed ahead of the start of construction with geological and structural data from these tests fed back into the design of the viaduct. This has resulted in a 10-15% reduction in the depth of the piles and associated time, cost and carbon savings.

“By providing a cleaner, greener way to travel, HS2 will help cut the number of cars and lorries on our roads, cut demand for domestic flights, and help the fight against climate change.

“But we’re also serious about reducing the amount of carbon we use during construction, and the Colne Valley Viaduct is a great example of how we’re using the latest engineering techniques to do just that. Concrete is one of our industries’ biggest sources of embedded carbon – and this design will help us cut our carbon footprint while delivering a lighter, stronger and more elegant structure.”

“In designing the viaduct we have had to address the challenges of not only building a structure capable of handling the huge forces that will be exerted on it from high speed trains operating in both directions, but also to meet the demands of local stakeholders, creating a design that not only makes a positive statement, demonstrating world class engineering, but also really works within the environment in which it is placed.

“Working through the design process and using the original specimen design as a starting point, we have been able to deliver not only an iconic design but also a significant reduction in CO2 required to build the viaduct. This is not only a significant achievement for all those involved, but also for the environment.”

Construction began earlier this year, with the first of 292 concrete piles sunk into the ground to form the foundations for the viaduct.

On top of each group of piles – some of which will go up to 55m into the ground - a concrete pile cap will support each of the 56 piers which will in turn support the full weight of the bridge structure above. Instead of hammering the piles into the ground, holes are being bored before being backfilled to create the pile.

Set low into the landscape, the piers will support a series of elegant spans, some as long as 80m, which will carry the railway around 10m above the surface of the lakes, River Colne and Grand Union Canal.

The main deck of the viaduct will be built in sections at a temporary factory nearby before being assembled from north to south starting next year.