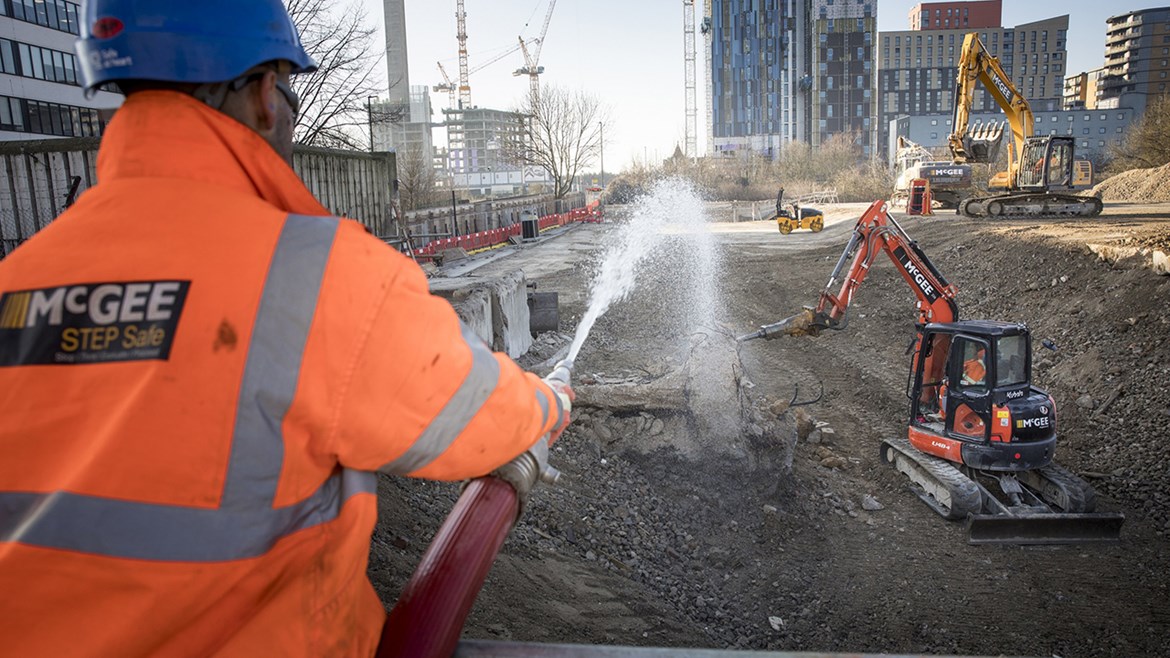 HS2 has completed its biggest demolition challenge to date, clearing a key construction site close to the new Old Oak Common ‘super-hub’ station, as work to deliver Phase One of the UK’s new high speed rail project continues to ramp up.

The 42,000m² site – equivalent to the size of six football pitches - is where HS2 will build the Victoria Road Crossover Box, a huge underground structure designed to allow trains passing through the London tunnels to switch tracks.

The clearance of the site, delivered by HS2’s London enabling works contractor, a Costain Skanska joint venture (CSjv) and subcontractor McGee, involved the careful demolition of eight separate buildings, with more than 98% of materials sent for reuse and recycling.

More than 6,500 cubic meters of rubble from the clearance of the old warehouses and light industrial units was processed on site and will be reused during construction of the tunnels and crossover box.

The team will now move on to clearing hardstanding, completing utilities diversions and collecting geological data that will feed into the detailed design of the crossover box.

“The Victoria Road Crossover Box will be a vital part of the underground infrastructure that will make Old Oak Common one of the best connected stations anywhere in the UK.

“It’s great to see so much progress and I’d like to thank the team for all their hard work over the past six months.”

“I am proud of the Costain and Skanska joint venture team, which has worked together to achieve this significant milestone for HS2. Our work continues apace across London, with the Ibis hotel and NTH Insull wing near Euston now almost complete and the University College London building on Hampstead Road expected to be finished within weeks.”

The underground crossover box is being designed and will be built for HS2 by a Costain/Skanska/STRABAG joint venture (SCS Railways). The 130m long box will be 25m underground, with three headhouses at ground level to provide maintenance and emergency access as well as a separate ancillary shaft.

During construction, the caterpillar-shaped crossover box will also be used to launch two of the four tunnel boring machines digging the tunnels from Old Oak Common to Ruislip on the edge of London. Excavated material from the tunnels will be removed via the box and taken away by rail from the nearby Rail Logistics Hub.

Once complete, the Victoria Road box could also be used to provide sustainable waste heat energy to hundreds of new homes around the site, as part of the wider Old Oak and Park Royal development.

A recent feasibility study, produced by HS2, proposed capturing hot air created by trains moving through the tunnels and using heat pumps to transfer it to the surface via the crossover box. This could then be used to heat water and power central heating for new housing developments.

In the long term, the Old Oak and Park Royal Development Corporation has plans for more than 25,500 new homes across a 650ha site, making it the largest regeneration project in the UK.

Across the whole of London, more than 1,000 people are currently at work, clearing the way for the start of construction. At Euston, demolitions are well underway alongside the project’s pioneering archaeology programme, while in Birmingham, clearance of Washwood Heath, the project’s future rolling stock depot, is also in full swing.

Work to clear the concrete slab covering the site of the new Birmingham Curzon Street station is also underway. In total more than 7,000 jobs are supported by the HS2 project, both directly and in the UK-wide supply chain.