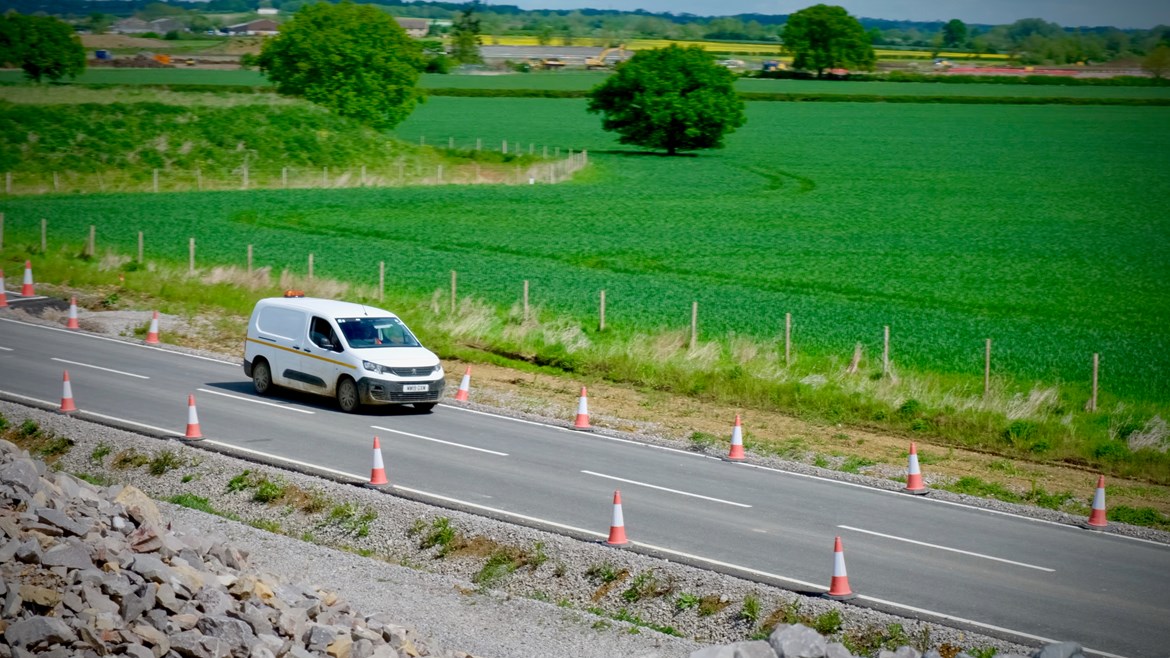 HS2 has opened the first stage of a 50-mile-long (80km) temporary access road that will link construction sites across Buckinghamshire, Oxfordshire, Northamptonshire and South Warwickshire and take pressure off local roads.

Closely following the route of the new high speed railway, the road is designed to carry around 400-500 vehicles every day – helping to get people, equipment, and materials to rural construction sites quickly and efficiently.

Built by HS2 Ltd’s main works contractor, EKFB - a team made up of Eiffage, Kier, Ferrovial Construction and BAM Nuttall – the first 11 mile (18km) section of the road, will link the major construction site at Calvert with adjoining sites in Aylesbury and Greatworth in Northamptonshire.

This section will help take HS2 vehicles off local roads for the final stages of their journeys and relieve pressure on the roads around Edgcott and Gawcott.

Further sections, to the north and south, are expected to be completed in the coming weeks. This will come ahead of a major increase in the amount of earthworks activity over the summer as the focus turns to building the cuttings and embankments that will carry the railway.

“The completion of the first stage of the Temporary Access Road is a really important milestone as work continues to ramp up across the central section of the HS2 route. In rural areas it can be a major logistical challenge to get people, materials and equipment to all our sites and a headache for local road users. That’s why I’m looking forward to the completion of the next stages and the benefits it will bring to both the project, and the local community.”

EKFB is set to shift 30m cubic metres of material during the construction of the central section of HS2 – with the vast majority of that material never leaving site. Instead, material excavated from cuttings will be reused locally for embankments and landscaping. A separate series of local ‘haul roads’ – made of compacted gravel – will be used by heavy earth-moving equipment and the articulated dumper trucks transporting this material.

“The temporary road, which is supporting the build of HS2 and a section of the East West Rail line, will help ease traffic and congestion around the surrounding villages and provide an efficient way to move people and materials around the site quickly and in the shortest distance. Eventually, we’ll be able to transport these things between all EKFBs sites.”

Once construction is complete the road will be removed, with the areas alongside the line landscaped and planted with new grassland and woodland. Some sections of the road could also be repurposed to provide useful transport links for the local community.