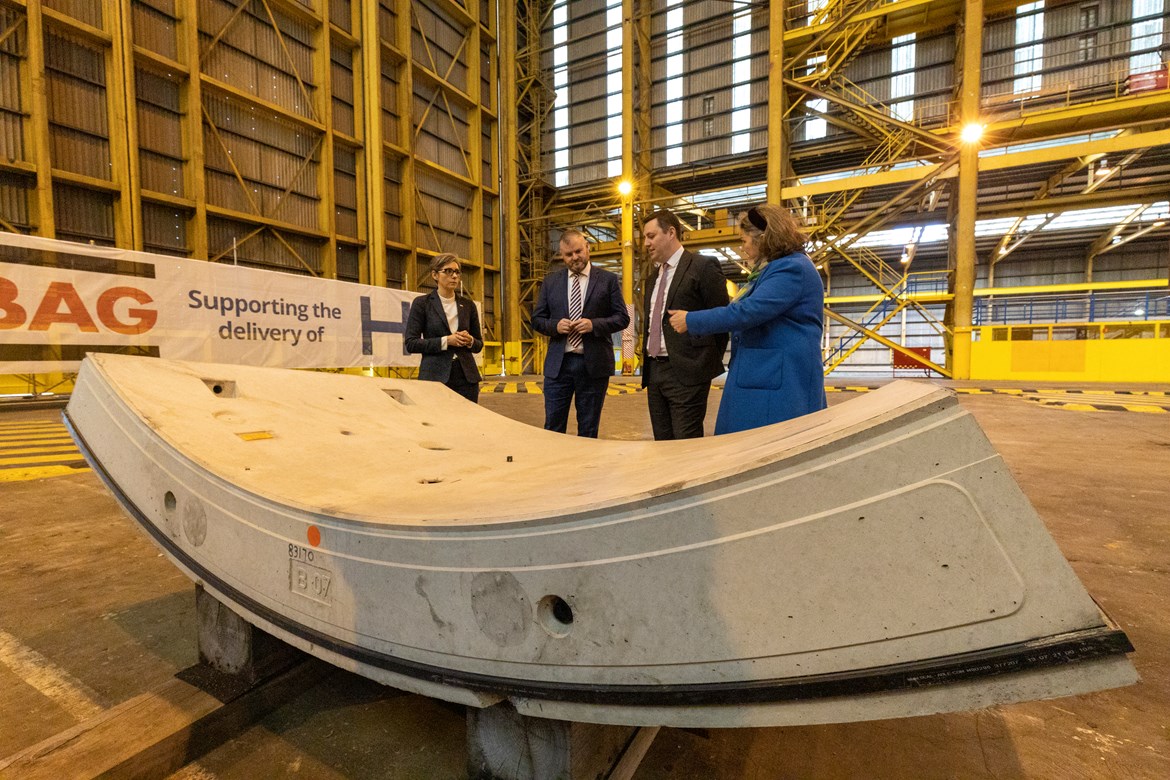 A landmark HS2 contract is set to see a brand-new factory created on an old oil rig fabrication site in Hartlepool, creating over 100 new jobs for people in the surrounding area.

HS2’s Main Works Civils Contractor, Costain Skanska STRABAG joint venture (SCS JV), have awarded their second contract for the production of precast tunnel segments to STRABAG, who have announced they will be opening the facility in Hartlepool to fulfil the contract.

STRABAG will be providing 36,000 segments for the twin bored tunnels under London from HS2’s new Old Oak Common station to Green Parkway running underneath Northolt.

Located at Hartlepool Dock, owned and operated by PD Ports, the new facility will employ over 100 people, creating new skilled jobs in the area for the duration of the project. New jobs could also be created and sustained by the additional supply chain contracts that will be available to support the manufacture and supply of the tunnel segments.

“This landmark contract to build a new factory in Hartlepool to manufacture items for HS2 shows building back better in action, giving new life to a vacant site and bringing over 100 new skilled jobs to the area.

“Companies across the North East are already benefiting from being part of HS2’s vast supply chain, with 400,000 supply chain contract opportunities expected on Phase One alone.”

“I’m delighted STRABAG is investing in Hartlepool to build a state-of-the-art production facility to manufacture concrete tunnel segments. Not only is this significant investment going to create 100 skilled, well-paid jobs for local workers, it will also breathe new life into a vacant piece of land at PD Ports; bringing it back into productive use. This is just the latest investment in Teesside by STRABAG who have already created a significant number of jobs at their tunnel lining facility in Wilton for the Woodsmith Mine project.”

The new factory’s well-connected location, both by rail and sea, means it is well placed to be utilised beyond HS2, working on domestic and international projects.

“The award of this contract is another important milestone towards the start of HS2’s tunnelling operations in London. The decision to manufacture the segments not only in the UK, but in a new facility in the North East, is another demonstration of how HS2 is having a positive impact on regional economies across the UK and helping the country to build back better after the pandemic.”

The new factory will be purpose built and will occupy an old oil rig fabrication site. Construction of the new factory will begin in January 2022 and the production of the precast concrete tunnel segments will commence in December 2022. All 36,000 tunnel segments will be transported from the Hartlepool factory entirely by rail, with the first freight train delivery arriving at the Willesden Euro terminal logistics hub in April 2023.

The contract for the lease at the site in Hartlepool will be signed for several years demonstrating STRABAG’s long-term commitment to manufacturing in the North East. Construction work to the existing site will start by redeveloping the exterior land parcel to suit the segment storage requirements and rail logistics platform, then focus will turn to the internal fit-out which will house a state of the art automated segment carousel and reinforcement hall. Robots will also be controlled by telemetry to produce the high quality reinforcement cages required for each segment.

“STRABAG’s Hartlepool and PACADAR’s Kent facilities are both key to the delivery of the HS2 tunnels in London. Tunnel segment rings will be produced in Hartlepool and loaded on to freight trains and delivered by rail to our newly opened Logistics Hub at Willesden Junction. These huge tunnel segments, each weighing seven tonnes, will be then transported to the tunnel boring machine. This is a game-changer in how we move forward in the construction industry and is a significant step towards net zero carbon emissions in transport."

“We are excited to be producing HS2’s tunnel segments here in Hartlepool with its excellent rail and port infrastructure. It allows us to deliver the segments to the HS2 logistics terminal near Willesden Junction efficiently whilst reducing the number of vehicles on the road and our environmental impact. This new production facility in Hartlepool and our existing precast factory in Wilton for the Woodsmith Mine project underline our long-term commitment to the region: as a result, another 100 skilled jobs will be created for the local community and many more through our supply chain.  We are eager to start production and welcome our new employees to the team.”

STRABAG joins a growing list of businesses with manufacturing facilities at Hartlepool Dock which is owned and operated by PD Ports.

“After more than 18 months’ worth of discussions, we’re absolutely delighted to welcome STRABAG to Hartlepool Dock as the base for its new manufacturing facility to supply concrete tunnel rings to the HS2 development. We’re very much looking forward to working with STRABAG as they play an integral part in the HS2 development, which, when delivered, will be an enabler for opening up the national rail network and increasing opportunities for freight movements trans-pennine, something PD Ports, alongside industry partners, has lobbied hard for with central government for a number of years.”