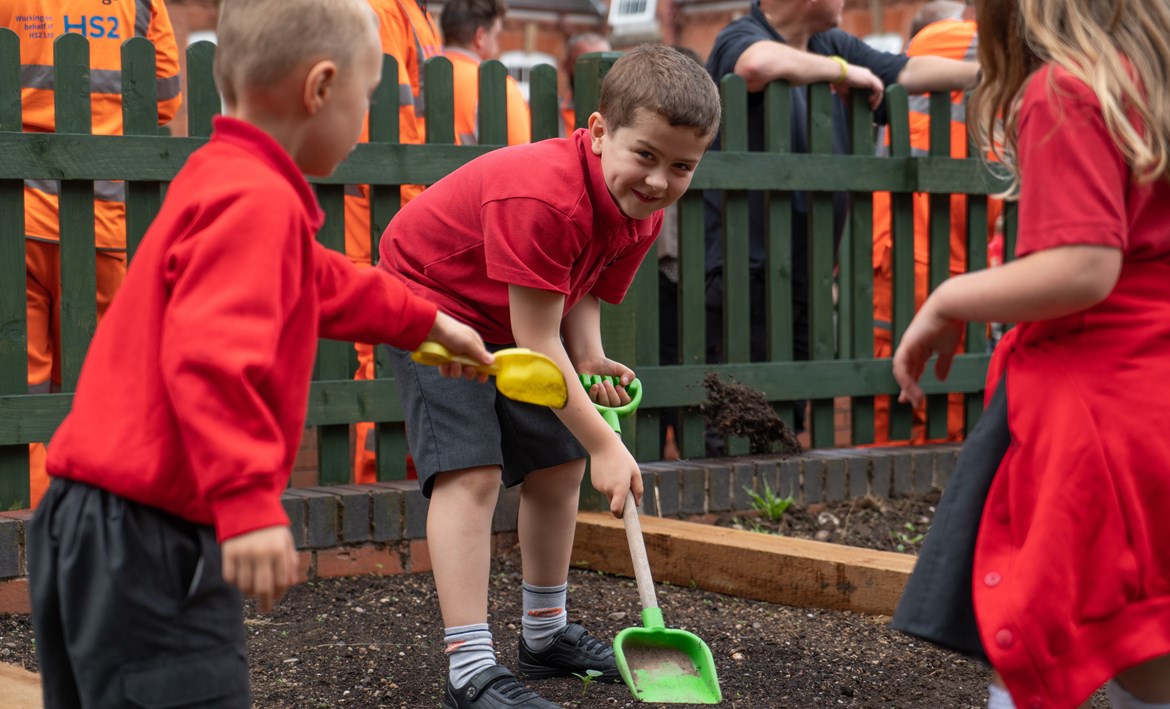 A play area at Balsall Common Primary School that has been closed off for the last few years has been completely revamped by 16 volunteers from HS2’s main works contractor Balfour Beatty VINCI (BBV), their supply chain and HS2 Ltd.

They then set to work placing around 40 new sleepers for garden boarders, erecting new fence and trellis posts, laying down new bark chippings, painting fencing, creating planting areas, laying new stone to footpaths and to the chill-out area plus re-building of a new entrance gate.

Redditch-based specialist environment company Acorn trimmed the trees and bushes in the adventure play area and donated the specialist Play Area Bark, and Flannery Plant Hire, a company based in Sutton Coldfield, provided a Grab Lorry to carry out the works.

“As we build Britain’s new high speed railway, we’re committed to working with local communities to leave a lasting, positive legacy across the route. Bringing together a team of volunteers from Balfour Beatty VINCI and HS2 across a range of disciplines, we were delighted to provide pupils at Balsall Common Primary School with a new adventure play area.

“Throughout, it was fantastic to see the unwavering support from our valued supply chain partners, as we were joined by two Midlands-based businesses, who are also providing many local job opportunities through our work to deliver HS2.”

“We are extremely grateful to the Balfour Beatty VINCI team, working with HS2, for providing their construction knowledge and brilliant support to create this new play area. The adventure playground and veggie garden had fallen into disrepair in recent years and was closed off with no access to our pupils for a very long time. Thanks to Balfour Beatty VINCI and HS2 we have now been able to welcome our pupils to a new accessible open space that they are already enjoying in their Autumn school term.”

“The bark on the ground makes it so ‘springy’ and it smells nice too,” said Jessie.

“I love playing quieter games and our new sensory garden lets me have the space,” said Harry.