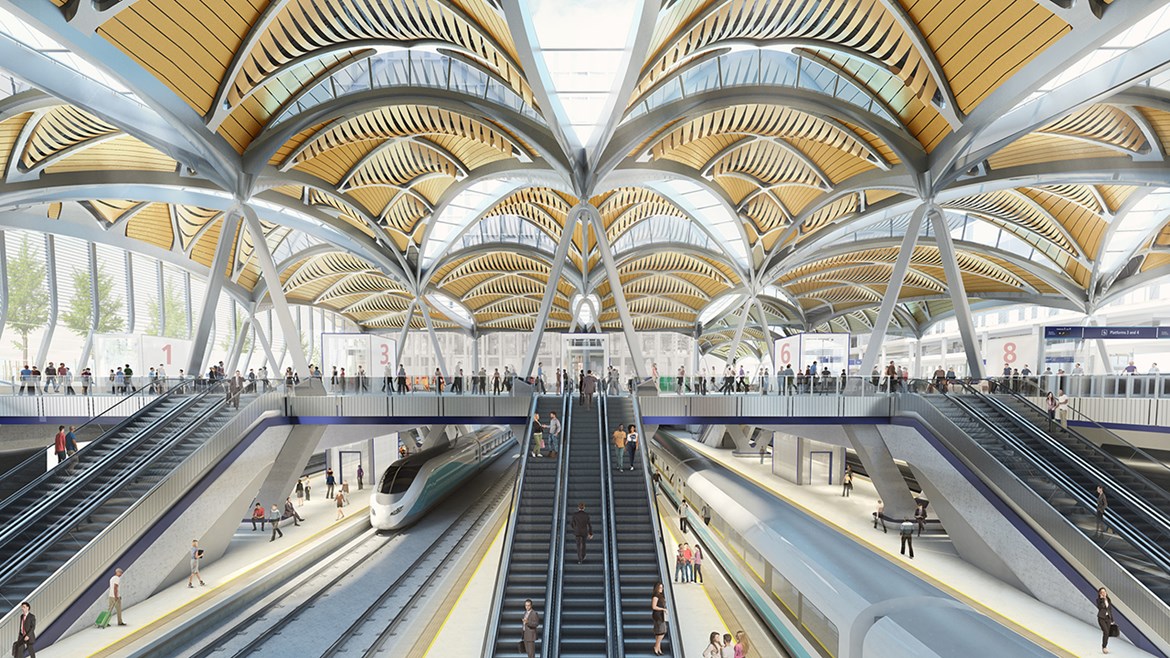 Work to transform Euston station into a gateway to the capital fit for the 21st century and deliver a brand new transport hub at Old Oak Common ready for the arrival of HS2, took a step forward today with the start of the search for the firms that will build the two London stations.

The announcement comes after the closure of Euston station over the weekend for essential HS2 preparatory works. The works were completed on time allowing services to run as scheduled on Bank Holiday Monday.

Overall, the investment at Euston and Old Oak Common is expected to help unlock 79,000 jobs and 29,000 homes around the stations, attracting businesses and housing developers to what will be some of the best connected locations anywhere in the UK. Contracts for HS2’s Birmingham stations, that are expected to unlock close to 52,000 jobs and almost 6,000 new homes, will follow in 2018, with all the new stations ready to welcome their first passengers in 2026.

HS2 services will eventually connect over 25 destinations and 30 million people across the UK. Trains will serve existing city centre stations in places like Glasgow and Liverpool, as well as brand new purpose built stations in Birmingham, Manchester, Leeds, and the East Midlands.

“The launch of the search for construction teams to build the southern HS2 stations is another major step towards making Britain’s new railway a catalyst for growth across the country. And next year HS2 Ltd will begin the hunt for companies to build the two Birmingham stations.

“The winning bidders will need to ensure that the stations provide the best possible customer experience. But there will also be huge and exciting opportunities for development around all HS2 station sites, not just in London and the West Midlands, but also in Manchester, Leeds, Sheffield and the East Midlands, unlocking huge opportunities for new jobs, homes and economic growth.”

“Launching this competition is another major milestone for HS2. Over the next decade, the successful bidders will go on to build two of the most challenging and high profile elements of the project – a brand new transport hub at Old Oak Common that will kick-start the regeneration of the site plus a major expansion of Euston.

“We’re looking for the best the construction industry has to offer. Companies that share our commitment to safety, efficiency, environmental protection and value for money. Together we will create two iconic stations – gateways to the capital and to the nation that local communities and the travelling public can be proud to call their own.”

Working with HS2 Ltd and the Euston and Old Oak Common designers, the successful bidders will act as Construction Partners, responsible for programme management as well as procuring, integrating and managing the complex supply chains.

It is expected that around 4,000 jobs will be supported during construction of the two stations, with around 700 during operation.

At Old Oak Common, HS2 will deliver a brand new integrated transport hub boasting some of the best connections anywhere on the network, with direct HS2 services to destinations including Liverpool, the North West, Glasgow and Edinburgh. New platforms will also allow passengers to connect to Crossrail – for Heathrow and the City of London – as well as services to Wales and the West of England.

The wider transformation of the former railway sidings and light industrial zone is being led by the Mayor of London’s Old Oak and Park Royal Development Corporation, which aims to create a thriving new community with up to 65,000 jobs and 25,500 new homes.

At Euston, eleven new platforms, built in two phases, will nearly triple capacity, improving people’s journeys and providing the opportunity for sustainable mixed use development on the site which could support up to 14,000 new jobs and almost 4,000 new homes.

The staged approach to building the high speed terminus means existing services can continue to operate, reducing both disruption for passengers and the effects on the community as a whole at any one time.

As well as improving journeys for long-distance travellers, HS2 will also open up extra capacity for commuters travelling in from places like Milton Keynes and Northampton and deliver a revamp and expansion of the London Underground station, linking Euston and Euston Square into one station for the first time, and providing a new ticket hall and provision for a potential future connection to Crossrail 2.