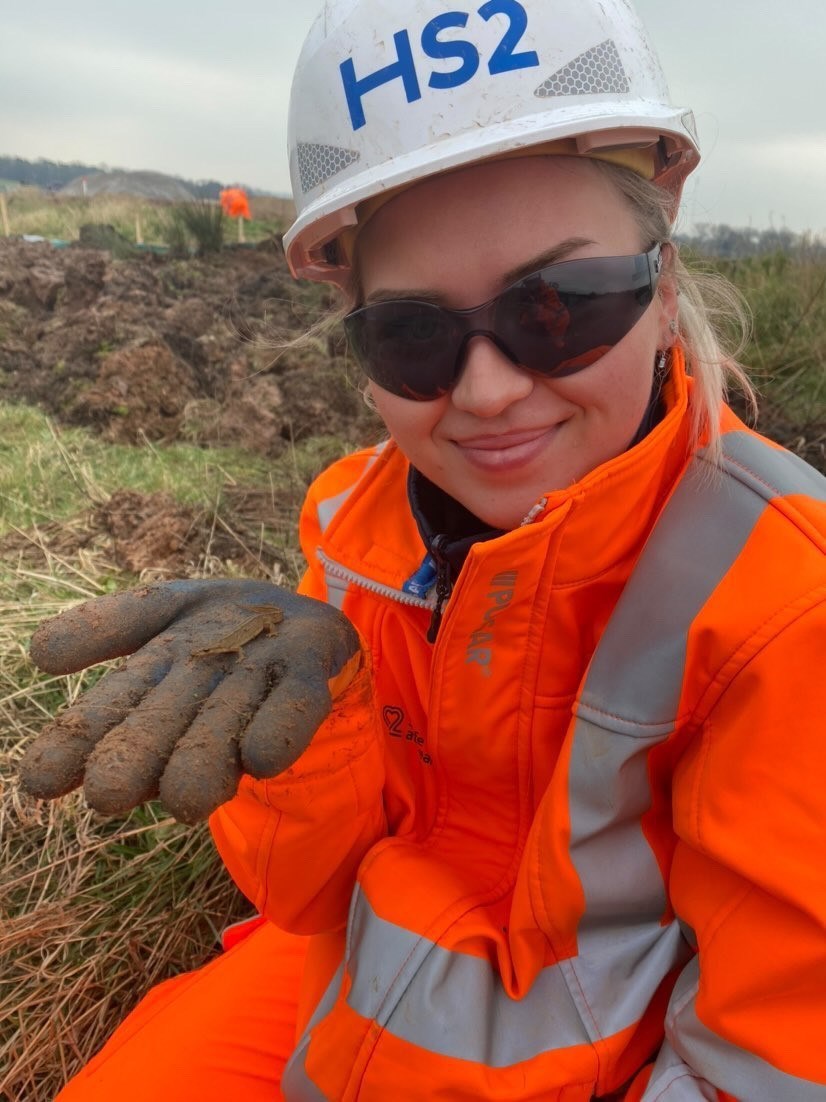 HS2 partners with BMET College to train a new team of environmentalists: Charlotte Moore has joined BBV's team of ecologists

An Animal Behaviour and Welfare graduate from Birmingham, who is passionate about wildlife conservation, has launched a new career on HS2 which is allowing her to fulfil her dream of caring for animals and the natural environment.

Charlotte Moore is embarking on a new career focused on ecology and the environment, and thanks to a collaborative enterprise between HS2’s construction partner Balfour Beatty VINCI (BBV) and Birmingham Metropolitan College (BMET), nine trainees have also progressed into environmental focused roles supporting BBV’s construction programme.

As part of a dedicated drive to address a skills shortage, the two organisations joined forces last year to develop a new environmental technicians training programme that combines classroom learning and accreditation with hands on work experience. On completion, trainees transition onto a paid employment trial working alongside BBV’s team of ecologists.

For lots of graduates like Charlotte, moving into their field of expertise straight after university proves challenging. Leaving home to pursue a career or taking a seasonal job to gain work experience are often seen as the only options.

Charlotte hoped to become a zookeeper when she graduated, and never imagined that a job in construction would enable her to work with animals. But after a meeting with Balfour Beatty VINCI’s skills and employment team, Charlotte was encouraged to take up a work placement to discover if working alongside a team of ecologists might provide the career kickstart she yearned for.

“I was working in a coffee shop when I graduated, as it was obviously difficult to move straight into a niche role like zookeeping. I had never considered that working in construction would allow me to care for animals and get involved in projects dedicated to protecting the natural environment.

“So far, I’ve helped to protect a cete of badgers, taken a hands-on role in translocating protected species, carried out bird nesting surveys and learnt a lot about the different plant and tree species that we are protecting and replacing.

“I had no idea about the role ecologists play in protecting the environment during construction projects but seeing this first-hand has really inspired me to follow this career path.”

HS2 published its Building the Skills to Deliver HS2 report in August 2021, which was supplemented by independent research forecasting where there are skills gaps in the workforce needed to deliver HS2. In the months that followed, HS2 and its construction partners began working closely to develop new training and skills interventions to ensure that HS2, and major infrastructure projects of the future, have the pipeline of talent they need.

“HS2 is creating careers, not just jobs, for people right across the region, and this initiative is one of many that really demonstrates we are on track to create the lasting skills legacy that we set out to achieve.”

Balfour Beatty VINCI is playing an active role in supporting HS2 to bridge the skills gap, with its newly established Skills Academy in Bordesley Green helping to train the next generation of construction workers. Now its partnership with BMET college is helping more talented individuals progress into a career supporting and caring for the natural environment, whilst ensuring that HS2’s construction works comply with environmental legislation.

“At Balfour Beatty VINCI, we are continually seeking new ways to encourage new entrants to the construction and infrastructure industry. Our partnership with Birmingham Metropolitan College further demonstrates how we’re going above and beyond to provide life-long careers for people across the region.

“Charlotte’s story is a perfect example of the diversity that a career in our industry can offer, and we encourage anyone who is out of work, or looking for a new start to keep checking the hundreds of vacancies we’re recruiting for”.

Balfour Beatty VINCI and HS2 are actively recruiting for hundreds of roles across the West Midlands.  For more information, visit hs2.org.uk/careers