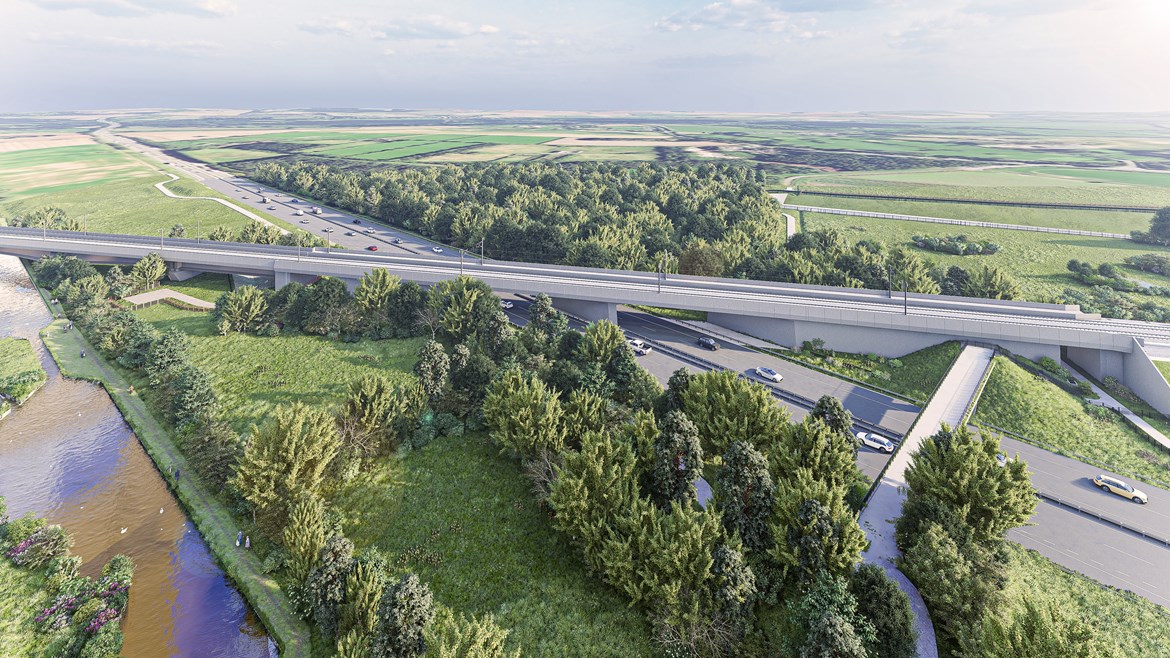 HS2 Ltd is set to start construction of the first HS2 railway bridge over a motorway in the Midlands this month, using innovative technology to dramatically reduce traffic disruption.

The 10,000 tonne bridge ‘box’ structure has a base, three walls and top slab and will be built on land next to the motorway. Once built, a hi-tech raft will then glide it into position. Whilst this technology is used on railways, this will be the first box slide of its kind over a motorway in the UK.

The bridge was originally designed as a traditional structure, which would have meant significant traffic disruption for motorway users, with around two years of reduced lane widths, 50mph speed limits and weekend and night closures.

This unique construction method will see the whole structure built on land next to the motorway and then moved into place in one movement, meaning only two one-week closures of the motorway over a 12-month period. This method also dramatically improves the health and safety of the workforce, who won’t need to work in close proximity to a live carriageway.

This section of the route will carry HS2 over the motorway as it heads north to Crewe, or on its southward journey as it loops into Birmingham Curzon Street or continues straight on to Interchange Station in Solihull, Old Oak Common Station and London Euston.

HS2 Ltd’s contractor Balfour Beatty VINCI (BBV) has started preparing for the construction of the ‘Marston Box’ bridge near Junction 9 of the M42 in North Warwickshire. The M42 will be closed for one week for the first stage of preparation work between Christmas and New Year 2021, with plans to move the structure into place during a week’s closure in winter 2022.

“At HS2 Ltd we’re always looking for innovative ways to reduce our impact on local communities, and this UK-first ‘box slide’ provides a quicker and safer solution. We’re working very closely with National Highways to ensure traffic management plans are in place, with a clearly signed diversion route to minimise any impacts during the motorway closure.”

“At Balfour Beatty VINCI, we want to drive innovative solutions that benefit local communities, whilst we work to transform the UK’s railway network.

“Through forward-thinking methods such as the ‘box slide,’ we are able to significantly reduce disruption for the travelling public, using the skills and expertise of over 100 of our people across a range of disciplines, to cut the motorway closure period to just two weeks over a 12-month period.”

During the one-week motorway closure this year, from 9pm on 24 December to 9pm on 31 December, the team will remove the motorway surface, excavate approximately 3m deep across the footprint of the structure, remove a redundant fuel pipeline, and remove an existing drainage system and reinstall it in its new location. Ground improvements will also be made in preparation for the box slide.

Two tower cranes will be erected on land next to the motorway to service the construction of the guide raft and the box structure in early 2022. The guide raft - a reinforced concrete slab, will be constructed first and then the box constructed on top. It will be a reinforced concrete box structure with base, three walls and top slab, with part of the jacking mechanism cast carefully into the base of the box.

The box slide itself involves a jacking system designed by specialist civil and structural engineering company Freyssinet, which will push the box across on the guiding raft. Once in motion, the box can reach speeds of over 2m per hour, so the whole operation of the box slide should only take 4 days, with a week closure required for the preparation, box slide and re-opening of the M42.

“We’ve been working closely with colleagues at HS2 Ltd to plan this closure over the Christmas period when we know that major A-roads and motorways are quieter. While we appreciate this closure will cause some disruption on this part of the M42, we’ll be lifting and completing hundreds of miles of roadworks across the country between Christmas and New Year to help keep traffic flowing.

“We’d encourage all motorists to familiarise themselves with the diversion route before setting off and to leave additional time for their journeys. We’d also like to remind people about the importance of checking their vehicle before setting off on their journeys. Simple things like checking your fuel and oil levels, tyre pressures and that all lights are working properly, can keep you moving and the network flowing.”