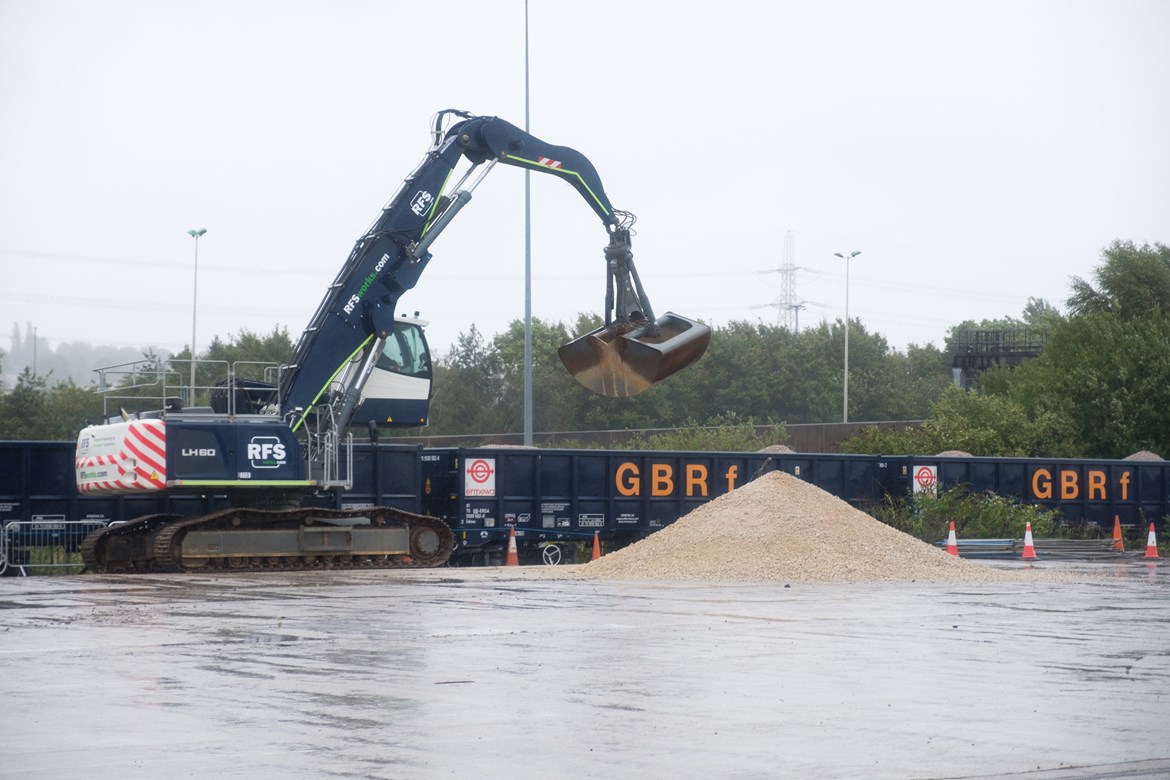 Today (Tuesday 25 August) saw the first rail freight delivery of aggregate arrive at HS2’s Washwood Heath site in Birmingham, signalling the start of HS2’s major programme to take up to 1.5 million lorries off the roads to cut carbon emissions.

Over the next decade, up to 15,000 freight trains will haul 10 million tonnes of aggregate to HS2 construction sites. Each freight train replaces around 70 lorries, representing a massive reduction in carbon emissions and marking a significant investment for Britain’s rail freight sector.

The Washwood Heath Railhead site, managed by HS2’s main works civils joint venture Balfour Beatty VINCI, took the first delivery from HS2 preferred aggregates supplier Rail Stone Solutions (RSS) and their rail haulage partner GB Railfreight. Over the next four months, more than 150 trains will bring up to 235,000 tonnes of stone from quarries in the Peak District, equating to keeping an estimated 13,000 lorry movements off the road.

“HS2 is already playing a vital role in Britain’s green economic recovery, and today marks a significant milestone in our ambitions to reduce the project’s carbon footprint throughout construction.

“We’ve been working closely with Network Rail, our Main Works Civils Contractors, and Freight Operators for a number of years to make this possible, and to deliver on our commitment to move as much material as possible by rail rather than road and help benefit the environment.”

At Washwood Heath, 10 trains per week will each bring around 1,500 tonnes of aggregate supplied by RSS, which will be used to construct a large piling platform for the Bromford tunnel approaches, railway embankments, as well as haul roads around the site, which helps to limit the amount of vehicles on the public highway. Bromford Tunnel is the most northerly tunnel on Phase One, taking the railway in to Birmingham towards its destination at Curzon Street station.

A peak of around 17 trains per day will serve the Phase One programme beyond 2022. Other sites include HS2’s Rail Logistics Hub at Willesden which will welcome up to eight freight trains a day between 2020 and 2024. These will haul a total volume of around six million tonnes from the Euston approaches, including excavated material from tunnel boring machines – saving the equivalent of up to 300,000 lorry movements.

Almost one million tonnes of spoil arising from Euston station will also be removed by rail – the equivalent of up to 50,000 lorry movements. In addition, starting later this year approximately six million tonnes of aggregate will be delivered for works in the central area of the Phase One route, preventing up to 335,000 lorry movements from having to make the long journeys from the quarries supplying the material.

HS2 has been working with Network Rail for a number of years to ensure that capacity on the rail network is available for HS2’s contractors to deliver their requirements by rail rather than road.

“Network Rail has been collaborating with HS2 Ltd and its supply chain partners on the HS2 Materials by Rail programme for the past 2 years – we’re delighted to see today’s first materials freight train to Washwood Heath and will continue to work closely with the programme in the years ahead to maximise the contribution the UK rail network and rail freight can make to the construction of HS2.”

“The construction and infrastructure industry has a huge part to play in Britain’s carbon emission mitigation, which is why today marks such a significant moment for the HS2 programme. Balfour Beatty VINCI is deeply committed to creating more sustainable ways to travel and the modal shift from road to rail freight is a perfect example of how we can reduce our carbon footprint.”

“The team at RSS is really proud to have achieved this first milestone in the delivery of materials to HS2, working in partnership with our rail haulage supplier GB Railfreight and our sister company Rail Freight Services (RFS) which handles the unloading.

“The time and effort we have invested planning the delivery of millions of tonnes of aggregates to HS2 is beginning to pay off and we hope this is the first of many achievements over the next decade. As a preferred supplier on several sections of HS2, we’re looking forward to long-term relationships with both BBV and EKBF to deliver bulk materials in the most efficient and cost-effective way possible for the project.”

“HS2 is a hugely important project for the UK. Once it is completed it will play an important role in helping to move more passengers on the UK rail system and by releasing capacity for rail freight. The start of deliveries of aggregates from Hindlow Quarry to Washwood Heath is an important step forward in the construction of HS2. GB Railfreight are proud to be playing our part in making HS2 a reality.

“Railfreight is significantly better for the environment than moving aggregates by road and the partnership between our team at GBRf, RSS and the BBV JV will move the equivalent of more than 11,000 truck movements. The strong partnership has been key to the success of the project so far and will support the delivery of over 235,000 tonnes of aggregates this year.”