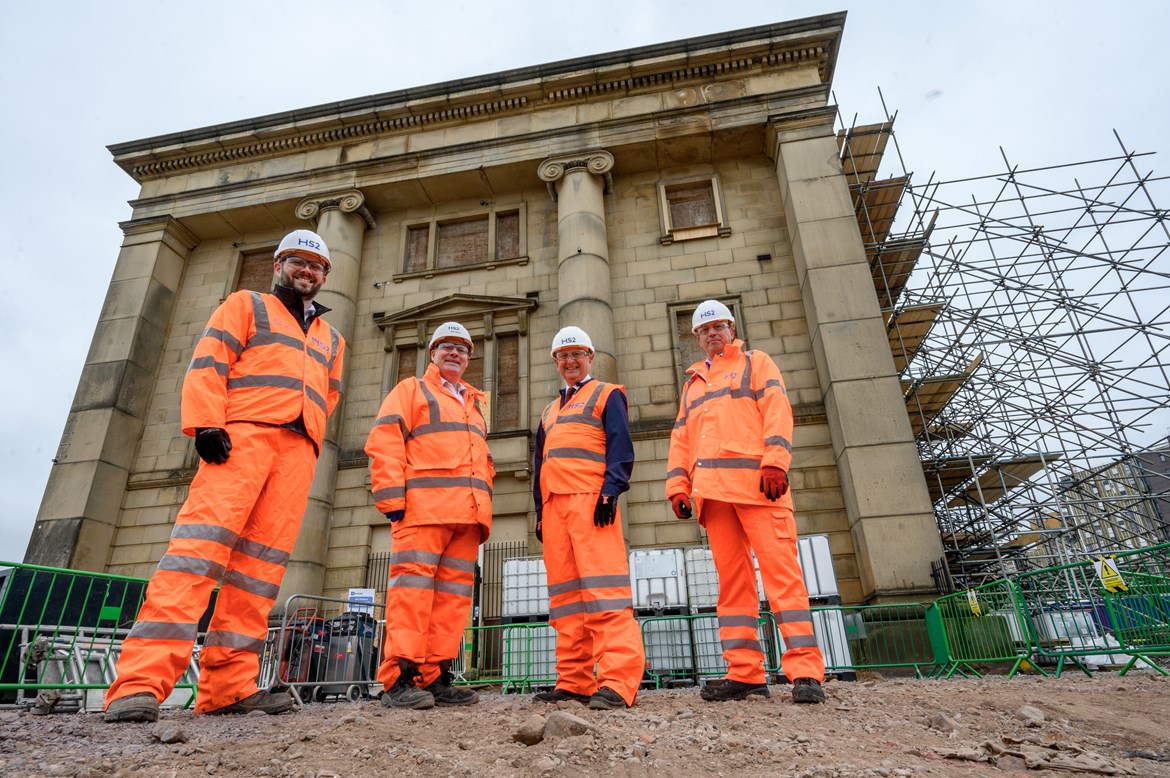 Over the next twelve months, a team of local experts will carry out intricate restoration work on the iconic building, which was designed by the notable architect Philip Hardwick and opened in 1838 as the Birmingham terminus for the London and Birmingham Railway Co. (L&BR) line that connected to Euston Station in London.

The project will be undertaken by national contractors KN Circet transport and Infrastructure division, a multinational company with offices in Solihull, who are working for HS2’s enabling works contractor LMJV (Laing O’Rourke and J. Murphy & Sons).

The Grade I listed building has been integrated into HS2’s plans for the new Curzon Street Station, which provide an enhanced setting to reflect the history of the old station as well as the Grade II listed Woodman pub. The public space surrounding the station will feature the historic track alignments of the former goods yard that used to lie to its east, and the gardens and new eastern concourse façade have also been designed to complement the architecture of the building.

“It’s fantastic to see work start on the restoration of the one of Birmingham’s most iconic railway buildings, and it’s particularly great to see a team of local specialists bringing their skills to this intricate restoration. Over 300 companies in the West Midlands have already won work on HS2, so this is adding to the growing number of companies benefiting from contracts on the project which is supporting thousands of jobs in the region.

“The revamped building is integrated into HS2’s plans for the city’s landmark Curzon Street Station, which will be the first brand new intercity terminus station built in Britain since the 19th century. Work is set to start on building the new station in the next year, with the joint venture contractor Mace Dragodos set to create 1,000 jobs.”

“The restoration will create high-skilled jobs, further demonstrating the economic benefit that HS2 is bringing to our city. We are entering a Golden Decade for Birmingham and the arrival of HS2 is at the heart of this.”

Work on the old Station building will include a new steel structural frame to strengthen the building, a new lift giving access to all four levels, new glass balustrade for the historic staircase, internal fit-out, roof repairs, structural repairs to the external façade, and a full clean of the external building masonry.

The restoration will present an exciting challenge for the team which will include local specialists who have traditional skills including carpentry and stonemasonry. Companies on board so far to work with KN Circet include Solihull-based Umberslade doing the strip-out, Redditch-based Orton Group supplying mechanical and electrical design and installation, and Rugeley based J.F.E. Attridge Scaffolding Services Limited.

“This is a fantastic and truly unique opportunity for our teams to work on such an iconic building from Birmingham’s past, and it will be a privilege to bring this important building back to life. The exciting part of their job is exposing the different structures so they can assess how to restore them using the same traditional methods, such as how the floor joists have been put together. They’ll also be restoring many original features such as the fantastic staircase and the existing windows, replace the internal doors like for like to meet new fire regulation standards, and also introduce accessibility features.

“HS2 is a wonderful project for Birmingham, giving these local contractors the opportunity to be part of Britain’s largest infrastructure project. We’re looking forward to working with our team of local specialists over the next twelve months.”

Old Curzon Street Station was the first railway terminus serving the centre of Birmingham and built during a period of great significance and growth for the city. Having suffered extensive damage during the Birmingham Blitz, and surviving two applications for its demolition in the 1970s, it is now listed on the ‘Heritage at Risk Register’ maintained by Historic England. The refurbishment will see this status change for the first time in over a decade, with future plans to use it as an HS2 visitors centre, with flexible facilities for office space, exhibition purposes and catering.

KN Circet, trading as KN Network Services Ltd, has carried out heritage restoration projects across the UK railway network predominantly in London and the South East. The company has won and been nominated for railway heritage awards for façade works at Lambeth North, South Kensington and Great Portland Street London Underground stations, and have also carried out façade works at Victoria Station and Waterloo Station for Network Rail.