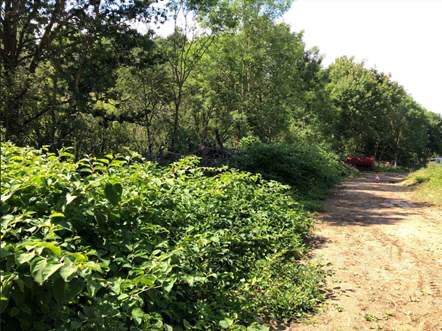 INNS are recognised as a major cause of biodiversity loss in the UK, and are unwelcome intruders in many areas of the country. Non-native plants such as Japanese Knotweed, Himalayan Balsam, Giant Hogweed and Rhododendron are becoming more common to our landscapes, to the detriment of native habitats.

Working with global infrastructure consulting firm AECOM, HS2 has implemented an effective strategy which drastically reduces waste creation, ultimately only implementing offsite disposal of soil contaminated with INNS and their seeds if other solutions are not feasible.

Traditionally on infrastructure projects, all soil with INNS plants, rhizomes and seeds present would be removed from site, including excavation of a prescribed larger buffer zone, and disposed of according to current legislation for controlled waste. Instead, HS2 is implementing measures focused on biosecurity and ‘surgical’ excavation, avoiding most of the costs and lorry movements associated with waste disposal but assuring removal of the problem.

As an example, HS2’s contractor Fusion JV worked with specialists in AECOM to manage a range of INNS, including the removal of significant areas of Japanese knotweed in the Colne Valley area. Minimising excavation saves substantial time, cost and carbon footprint by heavily reducing waste to landfill, resulting in cost savings estimated at £1.8m.

Conventional excavation of the Japanese Knotweed would have required vastly more soil to be removed, including areas adjacent to waterbodies in the Colne Valley, which would have necessitated major temporary works and significantly more waste disposal and imported backfill. Through a more strategic approach involving avoidance, partial removal, selective re-use, and capping instead of simply transporting away soil potentially impacted by INNS material, the excavation requirements were less than 30 percent of original estimates.

In the Midlands, 40 excavation sites were de-scoped as a result of AECOM and LM (a joint venture of Laing O’Rourke & J. Murphy) taking this approach when dealing with Rhododendron, generating an estimated cost saving of £20m achieved through reduced spend on labour, plant, materials and landfill tax.

“As part of our extensive environment programme, we are constantly looking for ways to protect our country’s precious biodiversity and to further boost HS2’s green credentials. Working with AECOM to tackle Invasive Non-Native Species, we have been able to significantly reduce the amount of waste to landfill, reduce the project’s carbon footprint and save money.”

“Our early engagement with AECOM and collaborative working with the Main Works Contractor Align JV to develop the scope of treatment and control of INNS through the Colne Valley, in parallel with development of the Main Works haul road designs, has enabled us to achieve far-reaching results.

“We are pleased to see the benefits that this approach is bringing to the project as we strive to reduce our carbon footprint, save money and reduce the environmental impact of landfill usage.”

“Our pragmatic and evidence-based approach is minimising excavation and reducing the carbon footprint, whilst also saving time and money. Tackling Invasive Non-Native Species is an important area of environmental work and innovative approaches such as this are leading the way for more sustainable and efficient infrastructure delivery.

“So far in the Colne Valley, AECOM has treated 47 Japanese knotweed stands, 10 Himalayan balsam stands and supported biosecurity implementation in highly infested waterbodies, all without slowing down the vital enabling works.”

AECOM uses an array of different methodologies focused on biosecurity, including soil protection, fencing and washdown stations, as well as in situ herbicide treatment. Alongside detailed specialist surveys and minimised excavations, this approach reduces environmental impacts and lorry loads of waste that would otherwise be transported away from site to landfill.