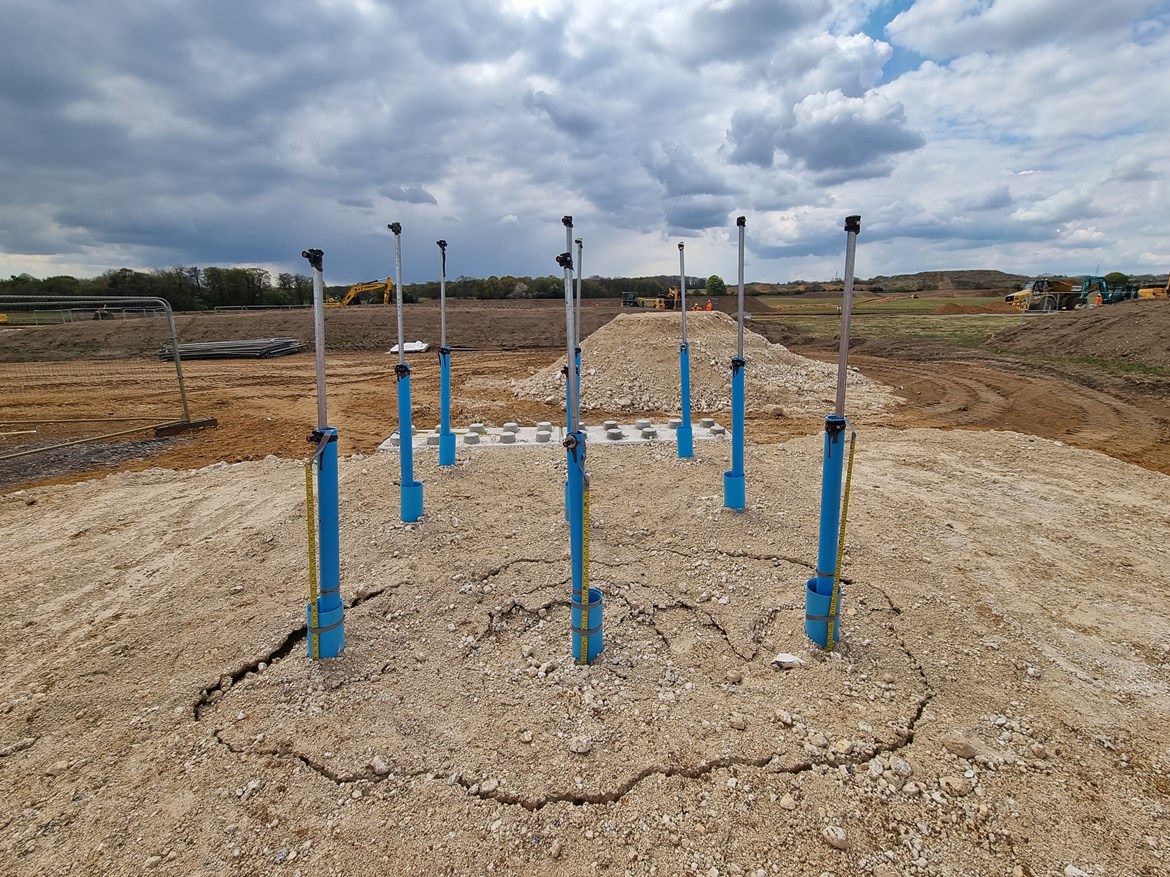 An HS2 construction site is the test bed for a potentially far-reaching fibre optic technology that can sense minute ground movements in embankments and cuttings, and could help prevent land slips and detect the formation of sink holes.

Developing a capability for early detection of movement, and taking precautionary action, can deliver huge savings in maintaining HS2 embankments and railway cuttings, as well as the wider railway and road networks. The importance of developing this technology is underlined by the increasing frequency of extreme weather and its effect on ground conditions.

Heavy-duty water-filled bags were laid in the base of the pit, sections of Sensorgrid were laid over it and then buried. Monitoring equipment then generated pulses of light that travelled through the fibre optic cable. To simulate ground movement, water was released from the bags causing the weight of the ground above to move and strain the mesh which in turn causes a change in characteristics of the light pulsing through it.

The team estimates that on construction costs alone, proactive preventive action enabled by Sensorgrid would be up to 10 times less than the cost of repairing ground that has failed. The benefits of disruption reduced or avoided would be in addition to this saving.

The technology is now undergoing a full scale live trial elsewhere at HS2’s South Portal site near the M25 motorway. Two kilometres of Sensorgrid has been incorporated into a cutting for the railway. It will provide continuous data to the monitoring team over the next two years.

As a new railway built to modern design standards, HS2’s vulnerability to extreme weather is much reduced when compared to older lines. Sections of the existing Victorian railway from Cornwall and Kent to Scotland have this year suffered land slips resulting from heavy rain, which has caused disruption to passengers.

“Sensorgrid is a great example of how we’re leveraging HS2’s size and scale to draw on British expertise to develop a technology and demonstrate its innovative capability in the early stages of construction. This will act as a test bed for proving out significant benefit to the operational railway, with long term benefits in bolstering the resilience of the UK’s transport network.”

“A lot of hard work has gone into this innovation, which has been in incubation for more than a year. It has been an exemplar of open collaboration and working as one team to deliver the solution. It’s fantastic to see the prototype being physically tested on our site and then the technology being implemented on the live project.”

“Sensorgrid opens a wealth of new opportunities to use fibre optic sensing in geotechnical applications, as it vastly improves strain transfer from the soil to the sensor.”