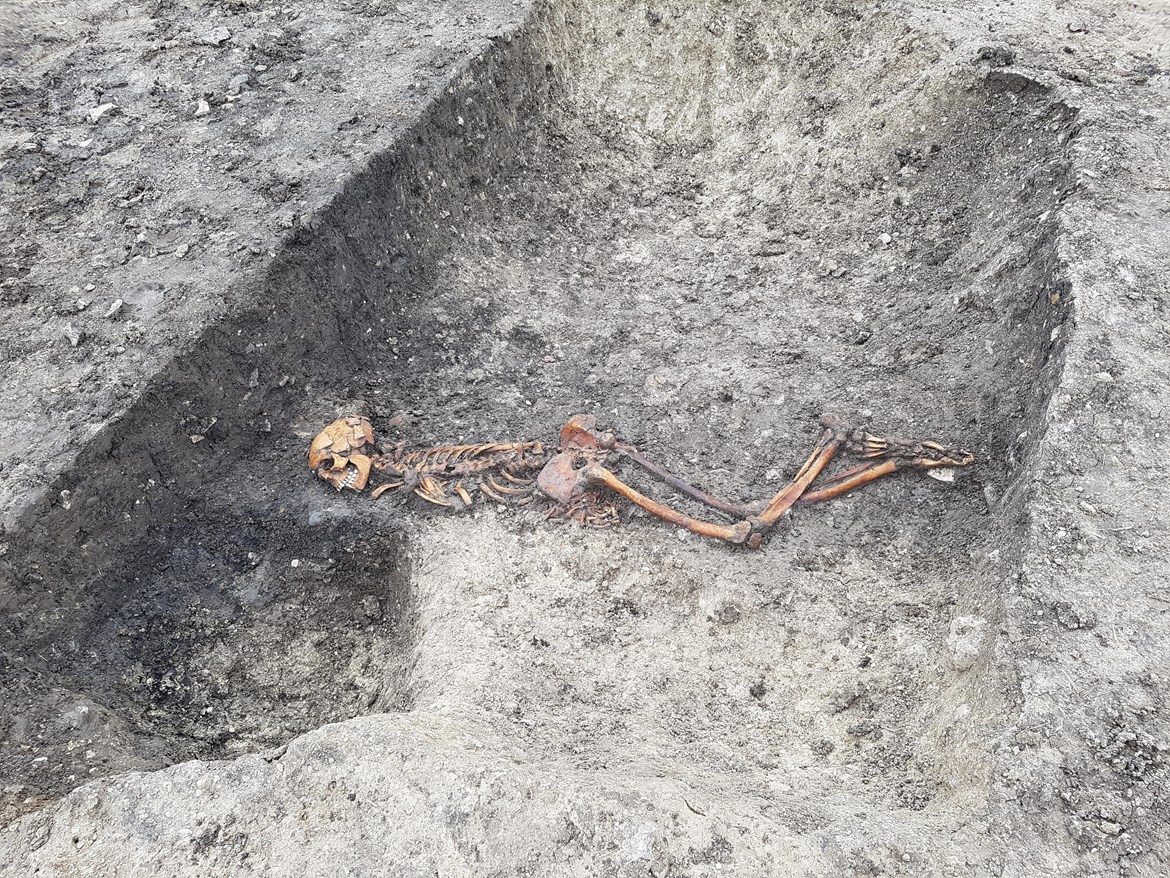 Archaeologists working on the HS2 project in Buckinghamshire have discovered a skeleton believed to be a murder victim from the Iron Age.

During the excavation work at Wellwick Farm near Wendover, archaeologists discovered a skeleton of an adult male buried face down in a ditch with hands bound together under his pelvis. The unusual burial position suggests the iron age man may have been a victim of a murder or execution. Osteologists are currently examining the skeleton for further evidence of foul play.

The archaeological works have revealed a wealth of archaeology with evidence of human activity dating from the Neolithic to the Medieval period, a time spanning around 4000 years.  The land to the west of Wendover seems to have been persistently used for ceremonial activity as archaeologists also uncovered a large circular monument of wooden posts 65 meters in diameter with features aligned with the winter solstice, similar to Stonehenge in Wiltshire.

At Wellwick Farm, archaeologists believe the Bronze Age and Iron Age saw the addition of some domestic occupation with at least one roundhouse identified and possible structures such as animal pens and pits used for disposing food. During the Roman period, this occupation may have moved to the current location of Wendover but the Wellwick Farm site was still used for burials. In a square enclosure on the site, archaeologists discovered a skeleton in a coffin that was lined with lead, with the outer coffin likely made of wood. Archaeologists believe that the buried individual must have been someone of high status as they had the means to pay for such an expensive method of burial.

The section of the HS2 route is being prepared to build the Wendover Green Tunnel and the Wendover North Cutting. The archaeology programme is a central part of HS2’s ground preparation works for Phase One of the project - London to Birmingham. HS2, its contractors and supply chain are well underway with a programme of work, clearing sites, ahead of main construction.

“We already knew that Buckinghamshire is rich in archaeology but discovering a site showing human activity spanning 4,000 years came as a bit of a surprise to us.

“The death of the Wellwick Farm man remains a mystery to us but there aren’t many ways you end up in a bottom of a ditch, face down, with your hands bound. We hope our osteologists will be able to shed more light on this potentially gruesome death.

“The large wooden ceremonial structure, the Roman lead burial and the mystery of the skeleton at Wellwick Farm helps bring alive the fact that people lived, worked and died in this area long before we came along.“

The announcement of the discovery comes at the at the start of the Festival of British Archaeology, an annual event taking place over nine days between 11th and 19th July. HS2 will be taking part, hosting digital events showcasing recent archaeological discoveries.

“Before we build the low-carbon high-speed railway between London and Birmingham, we are uncovering a wealth of archaeology that will enrich our cultural heritage.

“Our discoveries will be shared with communities and the public through virtual lectures, open days and in an upcoming BBC archaeology documentary.

“The sheer scale of possible discoveries, the geographical span and the vast range of our history to be unearthed makes HS2’s archaeology programme a unique opportunity to tell the story of Buckinghamshire and Britain.”