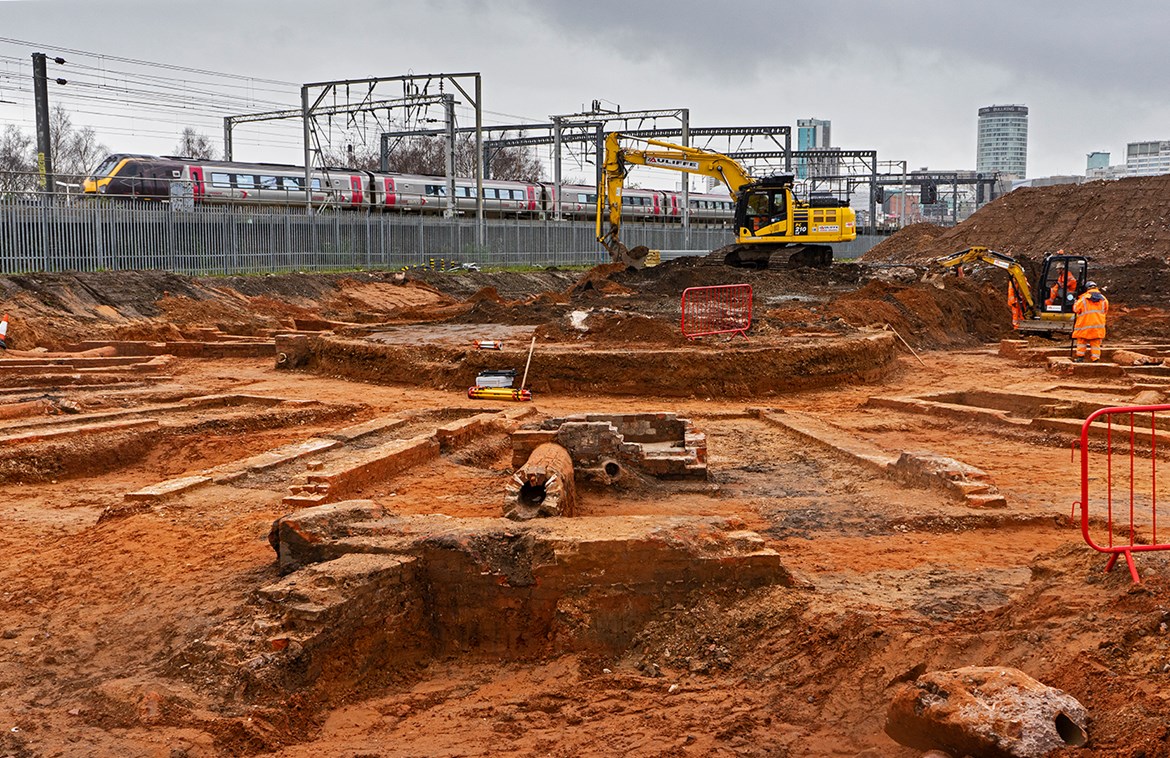 HS2 Ltd has unearthed what is thought to be the world’s oldest railway roundhouse at the construction site of its Birmingham Curzon Street station.

The roundhouse was situated adjacent to the old Curzon Street station, which was the first railway terminus serving the centre of Birmingham and built during a period of great significance and growth for the city. Built to a design by the 19th century engineer Robert Stephenson, the roundhouse was operational on 12 November 1837 – meaning the recently discovered building is likely to predate the current titleholder of ‘world’s oldest’ in Derby by almost two years.

HS2’s initial programme of trial trenching at Curzon Street revealed the remains of the station’s roundhouse, exposed toward the south-eastern corner of the site. The surviving remains include evidence of the base of the central turntable, the exterior wall and the 3ft deep radial inspection pits which surrounded the turntable.

The 19th century station at Curzon Street is among the very earliest examples of mainline railway termini and the limited later development of the site means that any surviving remains of the early station represents a unique opportunity to investigate a major early railway terminus in its entirety. As the HS2 project heads towards Main Works Civils, the final archaeological excavations on the site are about to take place.

HS2 will see the site become home to the first brand new intercity terminus station built in Britain since the since the 19th century. Birmingham Curzon Street station will be at the heart of the country’s new high-speed railway network, providing seven platforms, a new public space, and be integrated with an extended tram network.

Initially providing passenger services, Curzon Street originally consisted of two station termini, servicing the London and Birmingham Railway (L&BR) and the Grand Junction Railway (GJR); before being converted to a single goods station (following the opening of Birmingham New Street Station in 1854), and which operated until the 1960s.

Beginning at Curzon Street Station, Birmingham, and finishing at Euston Station in London, the 112-mile long L&BR took 20,000 men nearly five years to build. It has been estimated that to build the railway, construction workers shifted more material than the ancient Egyptians did when they constructed the pyramids.

The roundhouse, and specifically the turntable, was used to turn around the engines so locomotives could return back down the line. Engines were also stored and serviced in these facilities. The railway’s 1847 roundhouse at the southern end of the line is now better known as the world-renowned Roundhouse music venue in London’s Camden.

The L&BR terminus opened to passengers in 1838 and was fronted by the grand ‘Principal Building’ which survives in situ (as do elements of the GJR neo-classical screen wall). This Grade I listed building represents the world’s oldest surviving piece of monumental railway architecture. Various structures were demolished from 1860 to 1870 to allow for the expansion of the goods station, including the engine roundhouse.

Archaeological excavations are due to take place on the site between mid-February and mid-March, uncovering the roundhouse and other historic railway structures for the first time, including the remains of the Grand Junction Railway terminus.

The archaeology undertaken ahead of the construction of the new Curzon Street station will record the historical significance for the site and determine whether the remains can be preserved in situ.

“HS2 is offering us the opportunity to unearth 1,000’s of years of British history along the route and learn about our past. The discovery of what could be the world’s oldest railway roundhouse on the site of the new HS2 station in Birmingham City Centre is extraordinary and fitting as we build the next generation of Britain’s railways.”