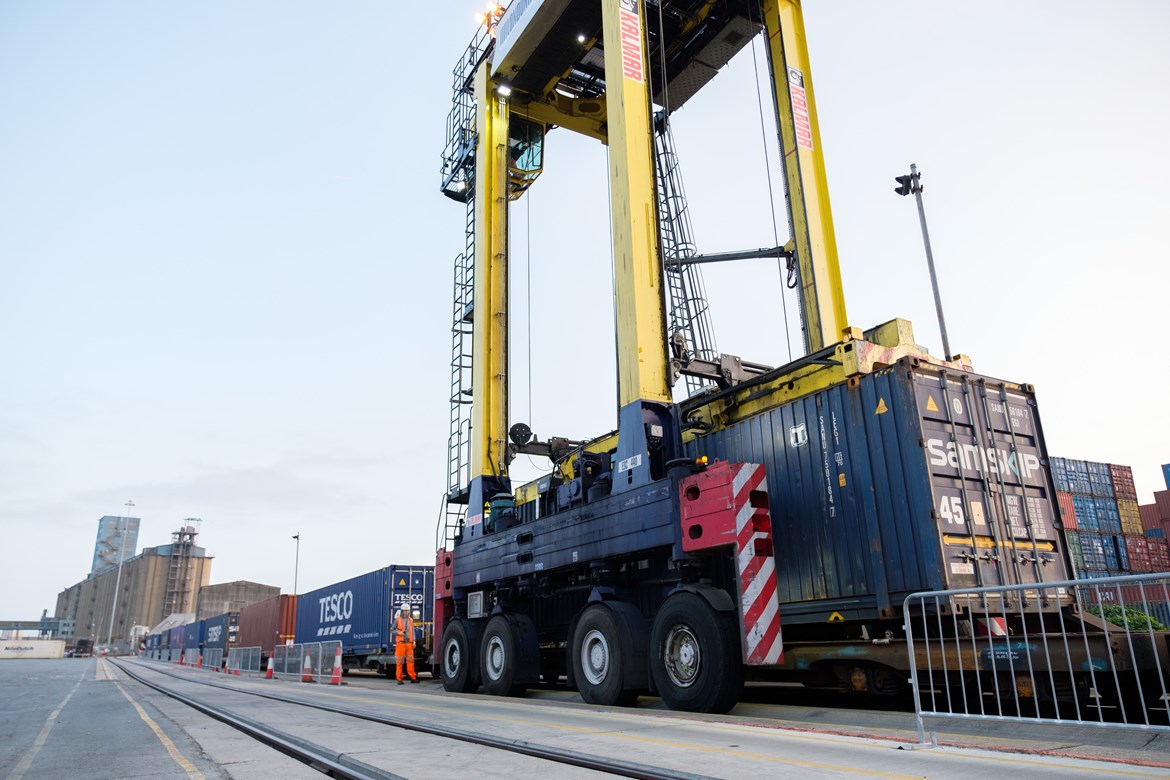 Today (Thursday 22nd October), HS2 Ltd has released a new video highlighting how the additional capacity HS2 will create on Britain’s existing rail network will benefit UK ports and distribution centres that use rail freight for the movement of goods.

Filmed at the Port of Tilbury in Essex, the video shows how additional network capacity for rail freight is essential for Britain’s low carbon future, as transporting goods by rail creates 76% less carbon dioxide emissions than equivalent road journey.

The Port of Tilbury is the largest port on the River Thames spanning 1,100-acres and incorporating the London Container Terminal and a new port complex, Tilbury2, which together handle over 500,000 containers and trailers per year for import and export. Tilbury2 also has a dedicated construction material and aggregates terminal (CMAT), capable of handling in excess of five million tonnes of bulk product per annum. With the development of Tilbury2, including its two rail terminals capable of handling the longest freight trains, the port has scope for significant increases in both unitised and bulk cargo flows.

The Port currently welcomes daily rail services to major retail distribution centres and customers in the Midlands, the South West, Wales and Scotland. The trains then return with British products for distribution around London and the South East and exported by ship around the world.

From everyday goods to construction materials, more than £30 billion worth of products are distributed by rail in Britain every year. The Port of Tilbury has invested around £23 million in new rail-related infrastructure over the last couple of years to help expand their capacity to deliver more freight by rail.

With logistics companies striving for a green recovery from the COVID-19 pandemic, and extra enquiries coming in as customers see rail as part of their supply chain decarbonisations plans, HS2’s capacity benefits will allow ports and distribution centres to offer more rail slots to their customers on the existing network – enabling our economy to grow in a safe and sustainable way. The Port of Tilbury anticipates the amount of materials moved by rail to increase by 900,000 tonnes per annum within the next five years, the equivalent of the weight of 429 London Eyes.

Speaking in a new video about the benefit of HS2 to UK ports, Carole Cran, CFO of Forth Ports said:

“HS2 will give us the headroom to grow our network of low carbon delivery routes. By building a new rail line, HS2 takes fast trains off the existing railway and places them on their own dedicated tracks. This allows local and freight trains to run at similar speeds on the existing lines, freeing up space across the network for many more passenger and freight services, so there are benefits for everyone, not just those who will travel on HS2.”

“Building HS2 is the best way to increase capacity for rail freight on Britain’s existing rail network. Giving the UK’s ports the ability to transport more goods using rail will take lorries of the roads, reducing carbon emissions from transport, and will help us achieve a greener future for Britain.”

“HS2 is the largest infrastructure project in Europe. It will bring a significant increase in rail capacity to the benefit of the whole UK. HS2 will free up capacity on existing lines to enable the transport of more rail freight including from major ports like Tilbury in my constituency. I fully endorse Tilbury’s push to grow its low carbon delivery model, with rail at its heart. Whether it’s food, medical supplies, or building materials, as we build back better, Tilbury will continue to play its critical role for the nation.”

HS2 Ltd has today also released a new explainer animation – ‘HS2: Upgrading freight Britain’ – which further demonstrates how, by providing additional capacity on the existing network, the new high-speed line will enable more freight to travel by rail, as well as allow an increase in local and regional passenger services.

HS2 will also take thousands of lorries off the roads every year as more freight can travel by rail. Each freight train removes up to 76 lorries from our roads, which currently amounts to 1.63 billion fewer kilometres a year by heavy goods vehicles, or more than seven million lorry journeys.