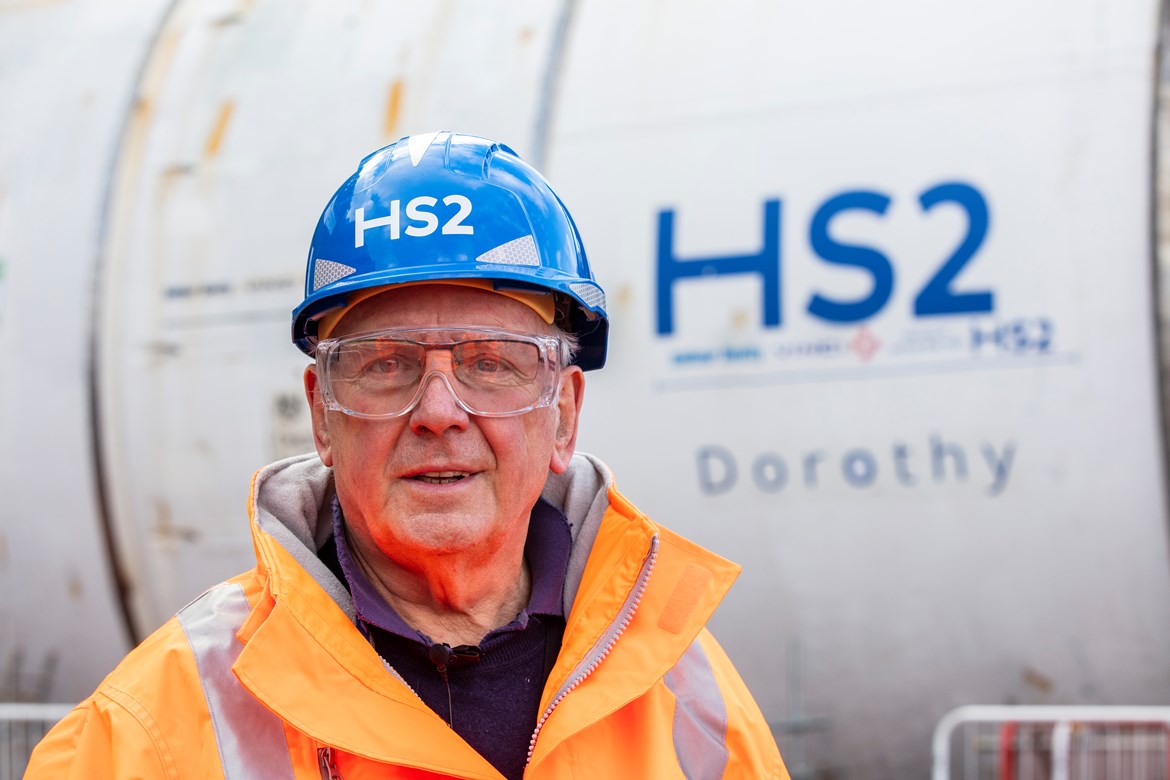 During a ceremony on the construction site, which is managed by HS2 joint venture Balfour Beatty VINCI, Pete revealed that the TBM is called ‘Dorothy’ – named after Dorothy Hodgkin, who in 1964 became the first British woman to win the Nobel Prize in Chemistry. Her discoveries included confirming the structure of penicillin, and her work with insulin paved the way for it to be used on a large scale for treatment of diabetes. She died in 1994 in Shipston-on-Stour in Warwickshire.

Earlier this year Warwickshire residents, schools, colleges and community groups were asked to nominate the names of women closely associated with the county. ‘Dorothy’ was suggested by a student at Warwickshire College Group and was the winning name in a public vote this summer.

Music Producer Pete Waterman, originally from Coventry, is a self-confessed rail enthusiast and has been a supporter of HS2 from the early days of the project.

After his visit to the tunnel portal construction site, Pete Waterman said:

“All my working life I’ve travelled and commuted by rail. HS2 is a new chapter in rail travel I can only hope that this railway can do for others what railways did for me.

“HS2 is the next generation of travel… with everybody talking about the environment, we sustain it by having the greenest transport there is.

“I think one of the things that people miss – think of the opportunity in jobs HS2 is going to create. It’s going to create apprenticeships, people will learn skills, they’ll learn how to interact with people.

“Our great grandchildren will thank us. Thousands of people across the West Midlands are working on this project, now. 20,000 people across the UK. That’s a massive employer. HS2 is creating more jobs than any other industry would ever do.

“HS2 is great for the railways, and for the people that invent them, but also for the workforce.”

“It was great to host Pete Waterman on site today to reveal the name of the Long Itchington Wood tunnel boring machine. We’re now finalising the preparation for the TBM to start digging the one-mile tunnel under the ancient woodland and look forward to it emerging at the south tunnel portal around five months later.

“This site is one of HS2’s largest construction sites in the Midlands and is contributing to massive job creation in the region – with BBV expecting to recruit 7,000 jobs, supporting the UK’s economic recovery after the pandemic.”

“This is an incredibly exciting milestone for our 150 strong team at Long Itchington Wood Tunnel, who have worked tirelessly to build the first tunnel boring machine on the Northern section of the HS2 route, over the last four months.

“As we reveal the name of this incredible, hi-tech, cutting edge machine, it is particularly fitting that as tradition dictates, it is named after such a prolific female scientist, one that revolutionised medicine and pioneered women in industry.”

The other two names put to the vote were Anne, after Anne Hathaway, the wife of the country’s most famous playwright William Shakespeare - suggested by a resident from Nuneaton; and Mary Ann, after Mary Ann Evans, better known by her pen name George Eliot, who was an English novelist, poet, journalist, translator and one of the leading writers of the Victorian era - suggested by a pupil at North Leamington School.

The 2,000 tonne tunnel boring machine will create a one-mile twin bore tunnel under Long Itchington Wood. Manufactured in Germany by Herrenknecht, the TBM is 10 metres wide and will take around five months to complete the first bore of two parallel tunnels. When it breaks through at the south portal, the machine will be brought back to the north portal to dig a second tunnel, creating the twin bore tunnel.

The tunnel, which will preserve the ancient woodland above, forms a key element in how HS2 is managing environmental impacts through the design of the railway, preserving Britain’s precious biodiversity.