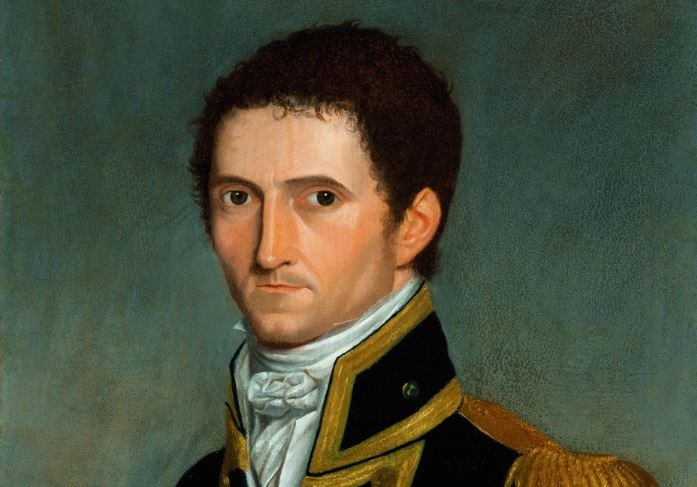 HS2 archaeologists were able to identify his remains by the lead depositum plate (breast plate) placed on top of his coffin. The discovery of his burial site among 40,000 other human remains in the burial ground so early in the archaeological dig has thrilled archaeologists working on the project. He was buried at St. James’s burial ground on 23rd July 1814.

Captain Flinders made several significant voyages, most notably as commander of H.M.S. Investigator which he navigated around the entire coast of Australia. This made him the first known person to sail around the country in its entirety, confirming it as a continent. He is also credited with giving Australia its name, although not the first to use the term, his work popularised its use. His surname is associated with many places in Australia, including Flinders Station in Melbourne, Flinders Ranges in South Australia and the town of Flinders in Victoria.

Following the expansion of Euston station westwards into part of the burial ground in 1840s, Flinders’s headstone was removed and it was thought that is remains had been lost. For a long time, there was an urban myth that Captain Flinders was buried under platform 15.

The discovery was made as archaeologists excavate the site where the HS2 station will be built. The archaeology programme is a central part of HS2’s ground preparation works for Phase One of the project -- London to Birmingham. The HS2 project is well underway with a programme of work, preparing sites, ahead of main construction this year.

At the bicentenary of his death in 2014, a memorial statue of Captain Matthew Flinders was unveiled by the Duke of Cambridge at Australia House and later installed at Euston Station. Virgin Trains also named one of its Pendolino trains “The Matthew Flinders”.

Captain Matthew Flinders will be reinterred with the buried population of St. James’s Gardens at a location to be announced.

Commenting on the discovery ahead of Australia Day on 26th January, Helen Wass, HS2 Head of Heritage said:

“The discovery of Captain Matthew Flinders’s remains is an incredible opportunity for us to learn more about the life and remarkable achievements of this British navigator, hydrographer and scientist. Cpt. Matthew Flinders put Australia on the map due to his tenacity and expertise as a navigator and explorer.

“Given the number of human remains at St. James’s, we weren’t confident that we were going to find him. We were very lucky that Cpt. Flinders had a breastplate made of lead meaning it would not have corroded. We’ll now be able to study his skeleton to see whether life at sea left its mark and what more we can learn about him.

“This discovery is particularly exciting for me as an archaeologist as Cpt. Matthew Flinders was the grandfather of renowned Sir William Matthew Flinders Petrie, commonly known as the ‘Father of Archaeology’.

“The Flinders name is synonymous with exploration, science and discovery and HS2, through its archaeology programme, will ensure that we maximise the opportunities for further academic and scientific study.”

The scientific study of human remains from St James’s burial ground will better our understanding of life and death in London’s 18th and 19th centuries, shedding light on health and disease, social status and lifestyle. Those buried in the long since demolished chapel and burial ground include individuals from all walks of life: paupers and nobility, artists and musicians, soldiers and sailors, inventors and industrialists, as well as victims of accidents, disease, suicide and murder. Research of the burial records has revealed that a number of other notable people were interred at St James’s, including:

“How we build HS2 is as important to us as what we are building, which is why we are committed to sharing as much of our cultural heritage as possible. The discovery of one of Britain’s most significant explorers helps us tell stories of our past as we prepare to build a high speed rail network that is an important part of our future.

“Before we bore the tunnels, lay the tracks and build the stations, an unprecedented amount of archaeology is now taking place between London and Birmingham. This is the largest archaeological exploration ever in Britain, employing archaeologists and heritage specialists from across the country and beyond, and we’re proud its part of the wider HS2 story.”