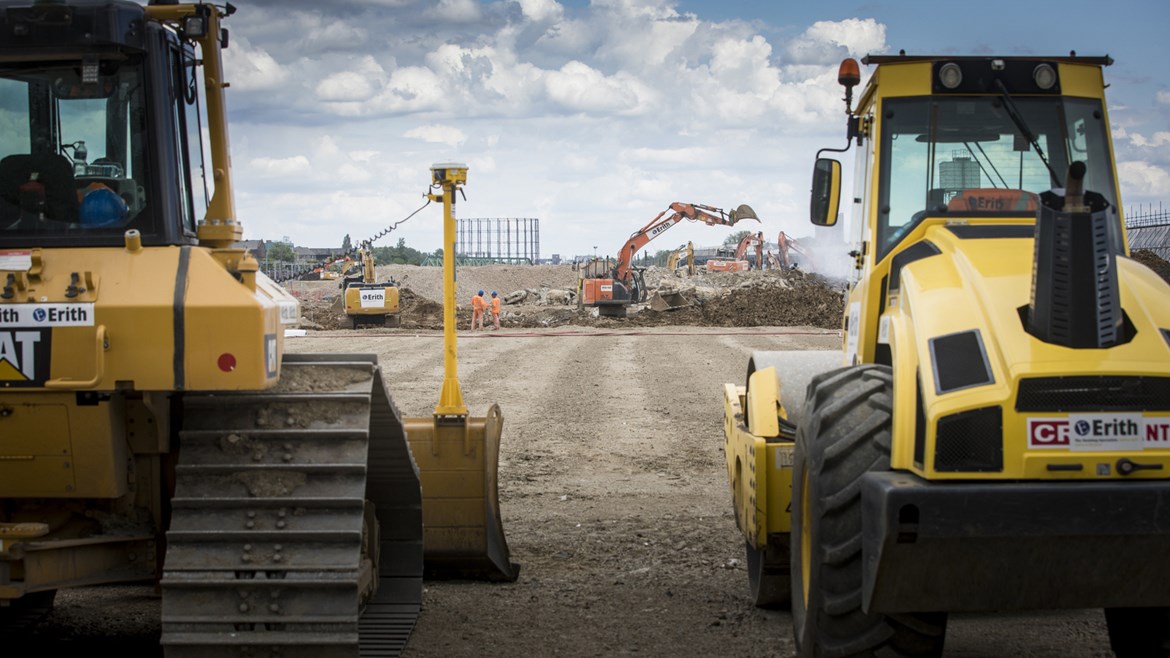 HS2 has completed the clearance of the former Great Western Railway sheds at Old Oak Common as work continues to prepare the way for the high speed rail project’s transformative West London super-hub.

The demolition of the enormous sheds – big enough to park more than 600 double-decker buses in - is a key milestone in the preparation of the 1km long station site.

The new station, designed to link HS2 with Elizabeth line (Crossrail) services to Heathrow and central London, and trains to Wales and the West of England, will be one of the busiest interchanges in the UK, with around 250,000 people passing through every day.

Alongside freeing up space on existing lines and improving journeys, the arrival of HS2 will unlock the wider regeneration of the area, with 65,000 jobs and 25,500 new homes set to be created as part of the wider Old Oak and Park Royal development.

Across the capital, more than two thirds of demolitions have now been completed, with more than 1,500 people at work on the project. Nationwide, more than 9,000 jobs are supported by HS2, both directly and across the UK-wide supply chain.

“HS2 will transform Old Oak Common, unlocking thousands of new jobs and homes around the station and improving journeys for millions of people travelling to Heathrow Airport, London, the Midlands and the North.

“The demolition of the sheds is a major milestone for the project, and it’s great to see how much progress the team has already made as we work to deliver West London’s new super-hub."

The demolition of the sheds was completed in four months by HS2 Ltd’s London early works contractor, a Costain Skanska joint venture (CSjv) and subcontractors Erith, as part of ongoing work to clear the site ahead of the start of construction.

Next steps include working through 110,000 cubic meters of earth to clear the site of obstructions and remove any hotspots of contamination built up over a century of continuous railway use.

Originally built by the Great Western Railway in 1906, the 280 meter long sheds were part of a vast depot, housing and maintaining steam and later diesel locomotives running in and out of London Paddington, much of which was cleared in 2011 to make way for the neighbouring Crossrail depot.

“The successful delivery of this challenging project shows just what can be done when you get the right team together. Alongside HS2 Ltd and Erith, I’m proud to say we’ve built a diverse team at Old Oak Common, including local people, female engineers, apprentices and people with previous careers in the armed forces. Our colleagues are working hard to encourage more people from under-represented groups to consider careers in our industry.”

“We are proud to have been awarded the Old Oak Common enabling works package for HS2. The works package has seen Erith utilise all its enabling skills in demolition, asbestos removal, temporary works, earthworks and remediation to ensure it provided the support structure required from CSJV and HS2.

“It’s been great to see the amount of collaboration between the CSJV and Erith teams to ensure the successful delivery of this vital piece of the project.”

Alongside the sheds, the team has also cleared the old Heavy Maintenance and Wheel Lathe Sheds as well as removing 40,000 tonnes of concrete slab which covered a quarter of the site. The former train wash was carefully deconstructed and moved to Penzance to be installed in the new depot.

Overall, 98% of material from the demolition of the sheds and associated buildings has been recycled or reused, with the surplus track donated to heritage railways around the UK. The concrete slab was crushed on site with the material set to be reused during construction.

The adjacent 1970’s diesel shed is due to be demolished in the autumn, with the Heathrow Express buildings expected to remain for at least a year, before they are also removed to make way for construction of the new station.