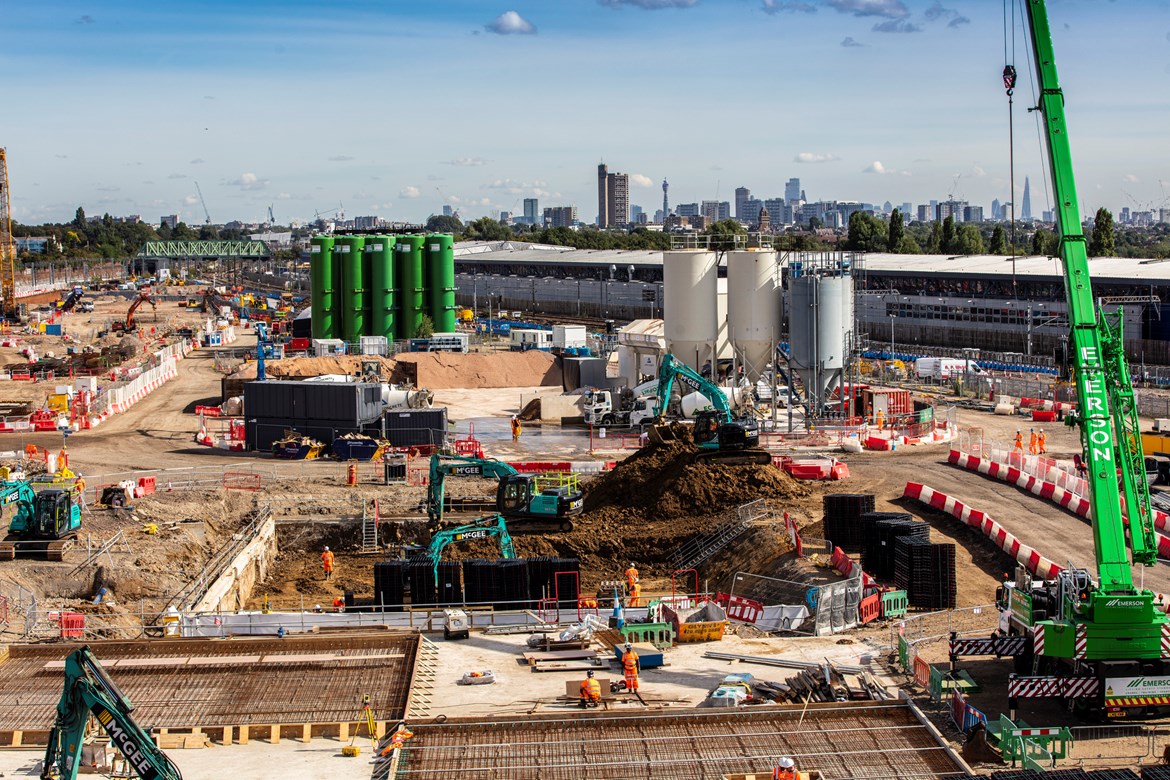 Work to construct the 850m-long station box at HS2’s Old Oak Common station began last month as concrete frame and substructure specialist, Expanded, started on site. Expanded has been appointed by Balfour Beatty, VINCI SYSTRA joint venture (BBVS), HS2’s Station Construction Partner responsible for the construction of the new HS2 Old Oak Common Station to deliver the main station box.  The station box is a reinforced concrete structure that will form the frame and base for the HS2 station building.

Once complete, Old Oak Common station is set to be the best connected and largest new railway station ever built in the UK in a single stage becoming one of the country’s most vital transport super hubs. Permanent construction for the station began in June 2021, as the Transport Secretary, the Rt Hon Grant Shapps, gave the thumbs up to signal the start of works.

The main construction of the 850m-long station box began on 27 October and will see Expanded – a Laing O’Rourke specialist trading business – excavate 20m below ground level removing 690,000 cubic metres of clay, before placing 32,000 tonnes of steel and pouring 190,000 cubic metres of reinforced concrete. The form of excavation known as “top down” construction allows the ground floor slab to be constructed initially with a series of mole holes allowing access for the large excavators to remove the earth from within.

The construction of the box at the east of the site allows the Tunnel boring machines (TBM) to be launched towards Euston. The west of the site is where the spray concrete lined tunnel between Old Oak Common and the Victoria Road Crossover box finishes.

The work to build the station will provide 2,300 jobs (with Expanded providing 500 of those, including 10 apprentices) and act as a catalyst for the UK’s largest regeneration project in the Old Oak and Park Royal area.

“The start of work on the gigantic station box structure is a key milestone for the team at Old Oak Common. Work is progressing well on site and we are pleased that Expanded have now joined us on site as the programme continues to move forward.”

Once complete, Old Oak Common station will have 14 platforms and allow a mixture of six high speed and eight conventional service platforms.

“The award of this contract builds on our extensive experience in the rail sector, especially in London and will see us work on another HS2 project where we have previously delivered bridges utilising our modular bridges capabilities.

“We are proud to be joining forces with the Balfour Beatty, VINCI, SYSTRA joint venture in delivering the main station box. We began pre-construction works in May and the team are pleased to have now started this mammoth task.”

Designs for the station show that the six high-speed platforms will be situated underground with an integrated connection to the adjoining conventional station by a split-level public concourse and dramatic conventional rail overbridge to provide seamless interchange. These are unified by a vaulted roof inspired by the site’s industrial heritage.

“We are pleased to be working with Expanded on the delivery of the station box, which represents an integral part of Old Oak Common Station. The reinforced concrete box will form the frame and base for the new state of the art HS2 station building as well as the six underground high-speed platforms.”

Old Oak Common will provide high-speed rail services to the Midlands, Scotland and the North and trains to central London and Heathrow and Wales and the West of England.