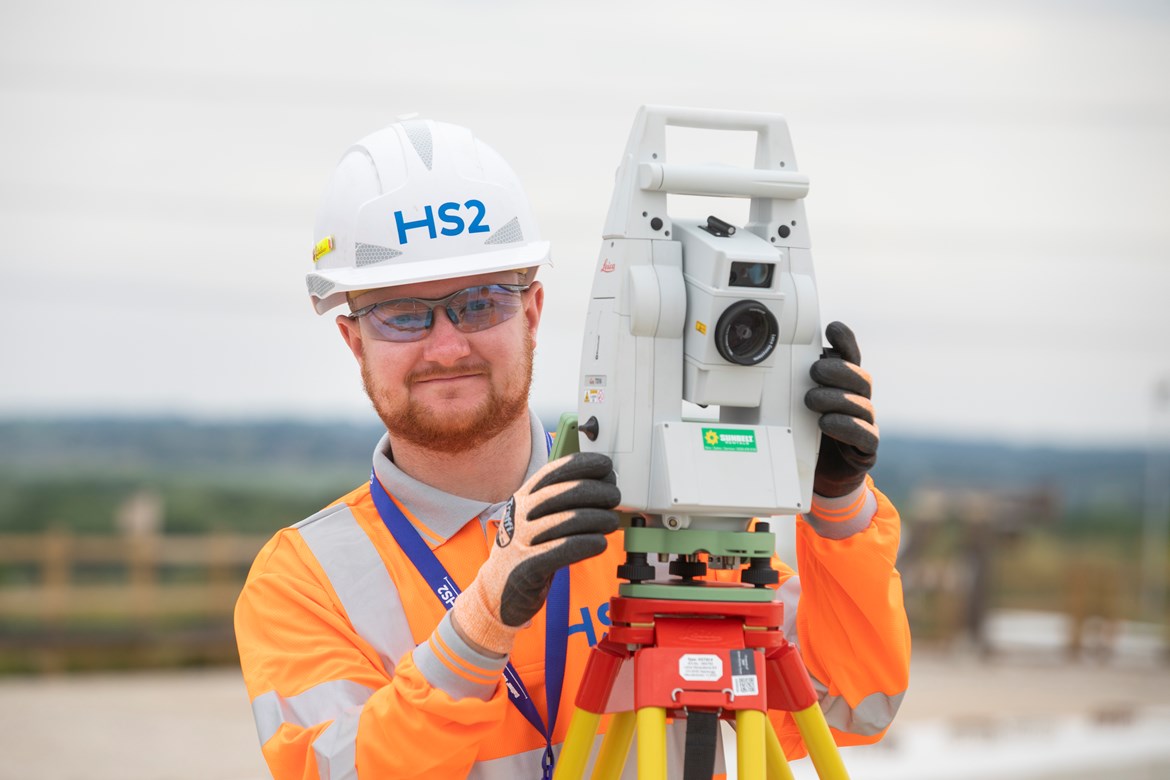 21-year-old Harry Roberts from Crudgington in Shropshire has reached the finals of HS2’s Inspiration Awards and is now in the final three vying to be crowned HS2 Apprentice of the Year.

Harry, who works as an apprentice engineering surveyor with Balfour Beatty VINCI (BBV), HS2’s civils construction partner for the West Midlands, Warwickshire and Staffordshire, began his career on Europe’s biggest infrastructure project in August 2021 and his dedication hasn’t gone unnoticed.

In just ten months, Harry has proven that he’s more than capable of balancing the demands of studying for his Level 3 Geospatial Survey Technician course at Dudley College and carrying out his day-to-day role on site, where he is supporting two of HS2’s major construction programmes at Water Orton and Kingsbury in Warwickshire.

Harry was shortlisted by his line manager, survey manager Thomas Noirot, who praised his ‘can do’ attitude for helping to fast track his career. Harry initially joined BBV as an assistant surveyor but his previous industry experience, coupled with his drive to succeed, meant he was quickly promoted to the role of apprentice engineering surveyor. Thanks to his leadership qualities and ability to work autonomously, Harry now manages all his own survey requests and oversees the day to day activities of an assistant team member.

“Harry has become a vital member of the team since he joined us back August last year. From his very first day on the project, his attitude and commitment has been fantastic, always eager to learn and happy to take on more responsibly.

“It’s been a pleasure to watch him go from strength-to-strength during this time and we’re so happy that he’s getting the recognition he so thoroughly deserves.”

Harry is one of three shortlisted finalists recognised for their outstanding achievements and commitment to supporting HS2’s vast construction programme. Winners will be announced at an awards ceremony at the Houses of Parliament on 4th July, hosted by HS2 Minster, Andrew Stephenson MP.

Reacting to the news that he has been shortlisted as a finalist for the Apprentice of the Year award, Harry said:

“I’m incredibly proud to be shortlisted for this award - it really means a lot, especially after all of the hard work I’ve put in over the past year.

“I feel very lucky to work on such an exciting project, and to work alongside a really talented team, who’ve been hugely supportive from day one. Thanks to HS2 and the opportunities it’s given me, I can look forward to a career that I couldn’t have imagined before.”

HS2’s Inspiration Awards recognise the achievements of individuals and companies within the supply chain who consistently demonstrate best practice and support HS2’s vision to leave a lasting skills legacy.