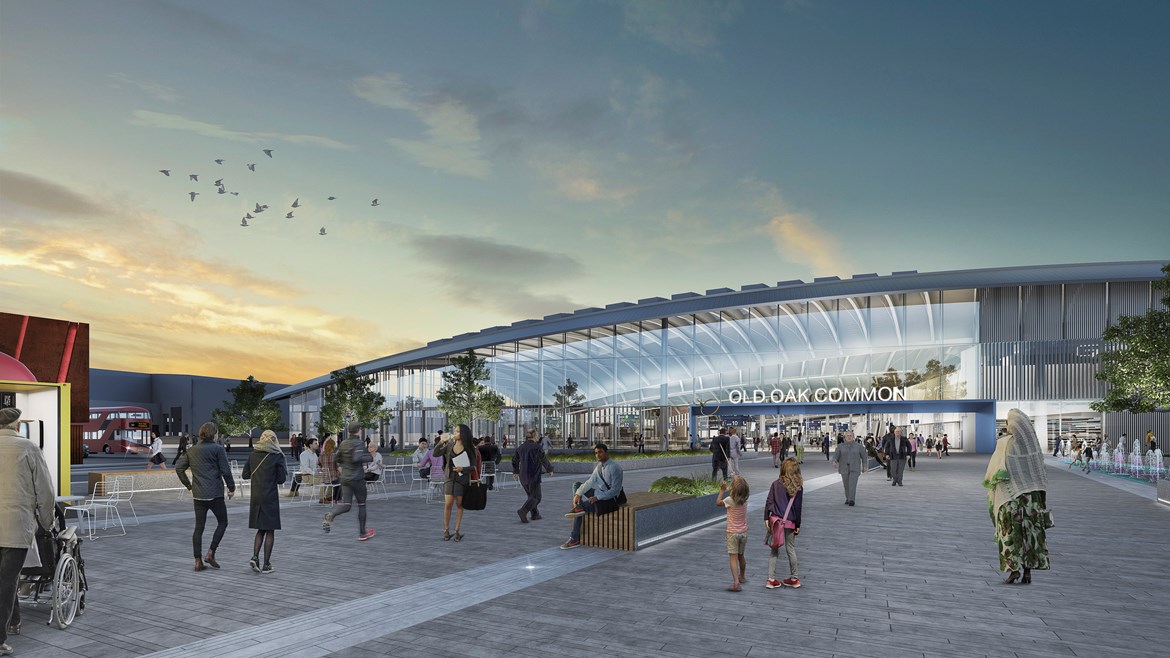 HS2 Ltd has unveiled updated designs for its west London super-hub at Old Oak Common, as part of the Schedule 17 submission to the Old Oak and Park Royal Development Corporation (OPDC).

The HS2 Old Oak Common station will provide a world-class interchange for an estimated 250,000 passengers each day and will be a gateway into Old Oak and Park Royal, one of the largest regeneration sites in the UK.  The station design development has been led by engineering professional services consultancy WSP, and architects WilkinsonEyre.

The submission is the next stage in the development of the Old Oak Common site. The local community and wider general public were consulted on the designs for the station in 2019, through a series of formal public engagement events.

Plans to transform the wider area around the station, a former railway and industrial site, are being led by OPDC and they project that the area around the new HS2 station will become a neighbourhood with the potential to create tens of thousands of homes and jobs.

The new HS2 station will incorporate passenger and retail facilities, providing a high quality and exemplary customer experience for all passengers and visitors to the station. It will provide direct interchange with conventional rail services through eight conventional train platforms, to be served by the Elizabeth Line (Crossrail), taking passengers to Heathrow and Central London, and trains to Wales and the West of England.

Designs for the station show that the six high-speed platforms will be situated underground with an integrated connection to the adjoining conventional station at ground level via a stylish shared overbridge. A light and airy concourse will link both halves of the station, unified by a vast roof inspired by the site’s industrial heritage.

To the west of the station, above the HS2 platforms, there will be a new public park, a green space which will welcome visitors to Old Oak Common and provide a new focal point for the growing community. The submission also includes an application to lower and widen Old Oak Common Lane, which will improve access to the station for buses and pedestrians.

Work at Old Oak Common to prepare for construction of the station has been ongoing since 2017 and the site is near ready to be handed over to HS2’s station construction partner at Old Oak Common, Balfour Beatty Vinci Systra JV (BBVS) who were awarded the contract last September. HS2’s Enabling Works Contractor, Costain Skanska JV (CSJV) have to date made considerable progress on the site, clearing 32,000 cubic meters of former rail depot sheds and outbuildings, working through 105,000 cubic meters of earth to clear the site and remove any contamination built up over a century of continuous railway use.

“Significant progress is already being made at Old Oak Common with site clearance ready for station construction to start. The Schedule 17 submission is the next step in HS2’s delivery of a world class railway, with landmark station architecture designed with future passengers in mind.

“HS2 will transform Old Oak Common, and will be the key to unlocking thousands of new jobs and homes around what will be the UK’s best connected transport hub.”

“Old Oak Common has been designed to be a landmark destination within the UK’s transport network and will be a force for regeneration in West London, supporting new jobs and homes within the wider OPDC area. The design responds to the station’s function, as two-thirds of those using the station will be interchanging between the below ground HS2 and the above ground conventional rail services.

“HS2 is a transformative project which has already boosted the skills and experience of the apprentices WSP has brought onto the Old Oak Common scheme, and we look forward to being part of its delivery.”

“Our architectural approach is inspired by the rich history of the site and its railway heritage. The station unifies the various connecting railways under a single roof, a series of interlocking arched vaults which break down the volume to a more human scale and celebrate the structural engineering as a fundamental part of the architecture. The dramatic volumes underneath have open and clear sightlines that promote intuitive wayfinding for users, and allow natural light and visual links outwards to the present and future context.”

Six 450m HS2 platforms will be built in an 850m long underground box, with twin tunnels taking high speed trains east to the Southern terminus at Euston and west to the outskirts of London. Material excavated during work on the tunnels will be removed by rail from the nearby former Willesden Euroterminal depot.

The planning application will now be considered by OPDC and a decision is expected by Summer 2020.