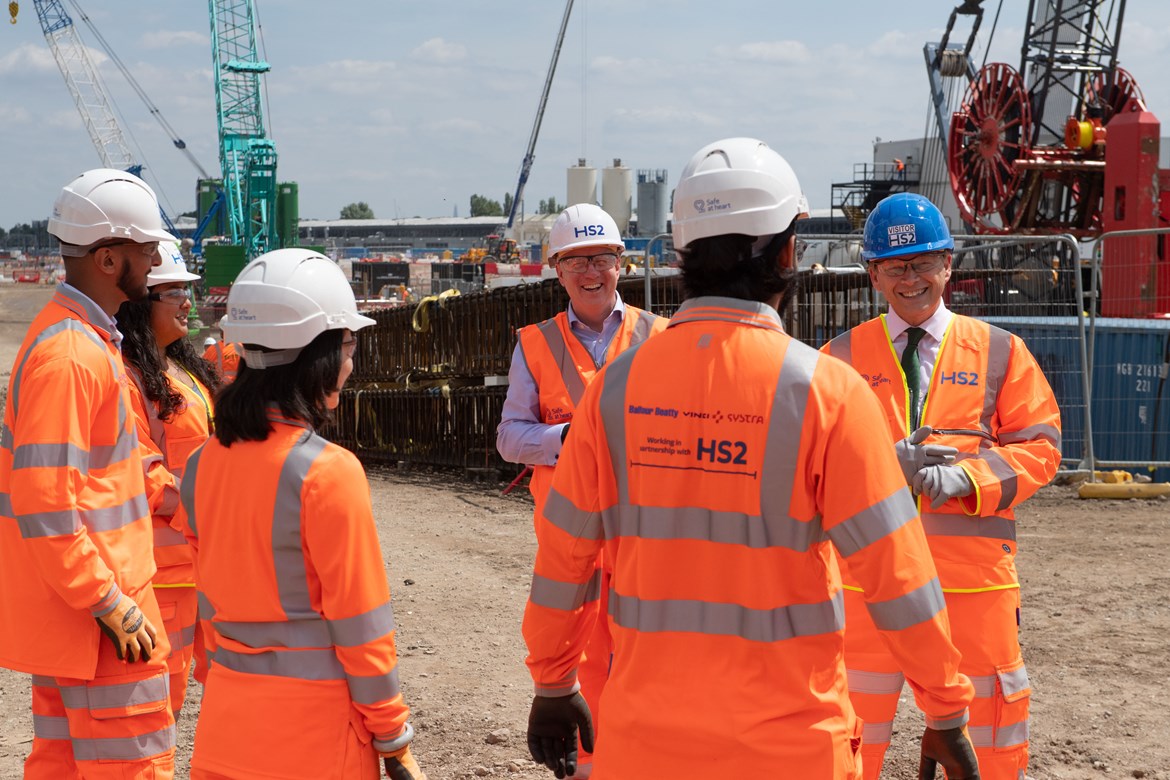 Today [Wednesday 23rd June 2021] HS2 Ltd will commence permanent works on its west London ‘superhub’ station - Old Oak Common. The Rt Hon Grant Shapps MP will visit the ten hectare site to meet the team working there, and give the thumbs up for work to begin on the biggest newly-built railway station in the UK.

Over 2,300 jobs will be supported on the site at peak construction, and over 250 apprenticeships will be created. There is also a commitment to recruiting local candidates of all ages and backgrounds for the project. On Women in Engineering Day 2021, the Transport Secretary and HS2 Ltd are proud to be striving to address the gender imbalance inherent across the construction and rail engineering sector. In its latest performance data, HS2 Ltd exceeded industry benchmarks set for the percentage of female employees that make up its workforce.

The Transport Secretary’s green light means that work will commence with the construction of a 1.8km long underground diaphragm wall around what will become the station’s ‘underground box’, where six HS2 platforms will sit to accommodate trains serving the Midlands and the North. Pilling rigs will also install 160 reinforced concrete columns inside the wall to help form the box and support the structure.

"The start of permanent works at the largest train station ever built in the UK in one go, Old Oak Common, marks yet more progress in delivering HS2, the high-speed, high-capacity and low carbon railway that will form the backbone of our national transport network.

“This ‘super-hub’ station shows our Plan for Jobs in action - kickstarting major regeneration, creating 2,300 jobs and 250 apprenticeships in construction – and underlines this Government’s determination to Build Back Better."

Once complete, HS2’s Old Oak Common station will offer unrivalled connectivity, with fourteen new platforms; six HS2 platforms offering high speed services to the North and Midlands, four Crossrail – or Elizabeth Line – platforms, and four conventional rail platforms, which will be served by trains to Wales and the South West.

Bringing the station together will be the station’s immense roof, covering the area of over three football pitches. The lightweight roof structure has been designed to minimize the use of materials and allow as much natural light in which reduces the carbon impact of the station. The environmental credentials of the station will be boosted by solar panels covering the roof, generating a supply of renewable energy for the station. The station design development has been led by engineering professional services consultancy WSP with architectural support from WilkinsonEyre.

“The start of permanent works at Old Oak Common station, our first station under construction, is a significant step for Phase One of HS2, as we deliver world-leading engineering to create what will arguably be one of the best-connected railway super-hubs in the UK.

“Over 2,300 jobs will be supported to build the new station; part of the 22,000 jobs being created to build the new high-speed railway between London and the West Midlands, and emphasising the key role HS2 is playing in Britain’s economic recovery after the pandemic.”

“This incredible milestone is testament to the dedication of our team, who have worked tirelessly to make this moment happen. With many more years of work to do, we are proud to be delivering one of Britain’s largest, connected and sustainable railway stations whilst simultaneously stimulating the local economy.

“Through our work, we are providing numerous employment opportunities for local people, as well as offering 250 apprentices the opportunity to start their career on the UK’s most exciting engineering project.”

With over 250,000 passengers using the station every day, Old Oak Common will become one of the country’s most vital transport hubs and a catalyst for economic regeneration for the area and the rest of the UK.  Plans to transform the wider area around the station, a former railway and industrial site, are being led by the Old Oak and Park Royal Development Corporation (OPDC) and they project that tens of thousands of new jobs and homes will be created around the new HS2 station.