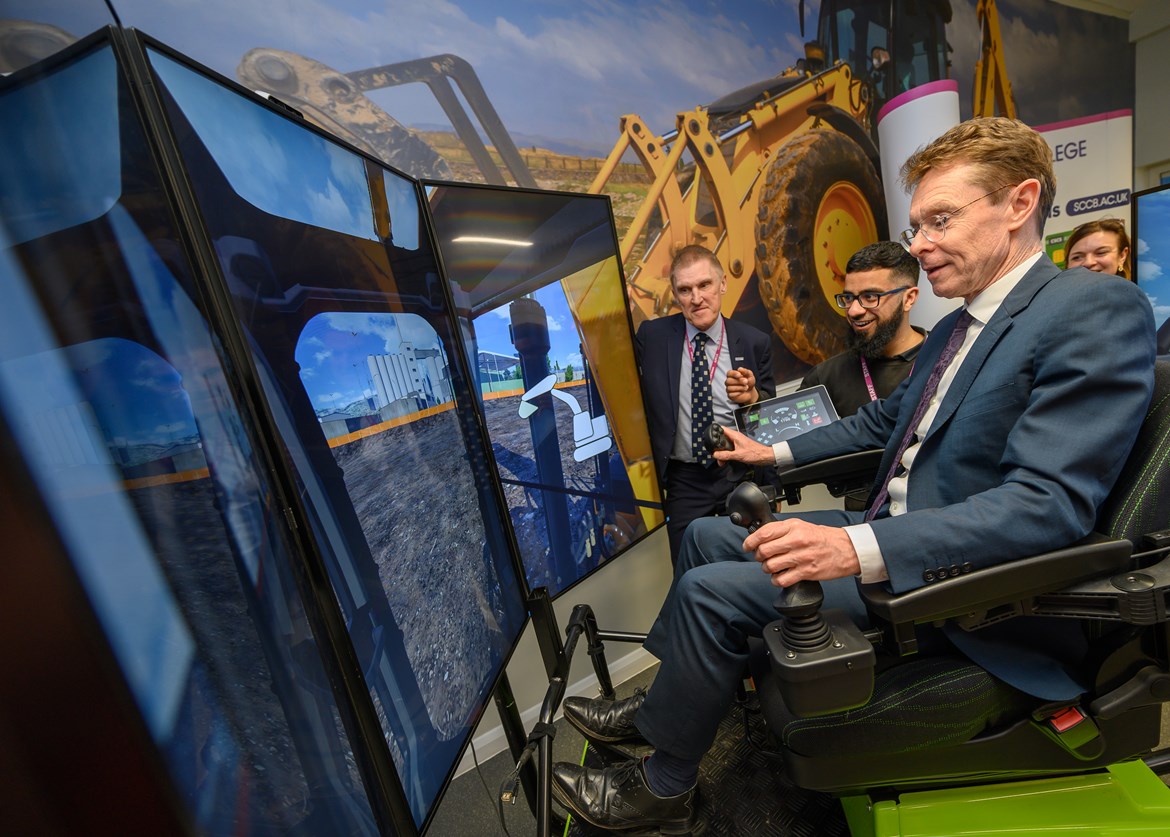 The Balfour Beatty VINCI Skills Academy, which sits within one of Birmingham’s most deprived wards, first opened its doors in November 2021, as part of a dedicated drive to upskill local people ready for work on HS2.

Since it opened with £1.1m backing from the West Midlands Combined Authority (WMCA), the Skills Academy has supported local people who were out of work into a job or onto further training in readiness for their chosen career path supporting HS2’s construction.

Today, the Mayor and Cllr Ian Courts, Chair of the HS2 Regional Enterprise Board, and leader of Solihull Council, welcomed the news that the Skills Academy is gearing up to train more people, ready to transition into 3,000 jobs over the next four years with Balfour Beatty VINCI’s labour supply chain partners.

“One of the main reasons I fought so hard to secure HS2 for the West Midlands was the local jobs it would create, and so it is brilliant to see that coming to fruition now.

“This exciting collaboration between Balfour Beatty VINCI and South and City College Birmingham, supported by our funding, is helping to give thousands of local people the opportunity to find high-quality and well-paid jobs as part of this once-in-a-generation infrastructure project. This Skills Academy is exactly the kind of initiative that helps those who have fallen out of work find employment as part of my 100k jobs plan.”

“HS2 is about boosting transport, driving business and creating thousands of long lasting jobs that will level up the nation.

“Balfour Beatty Skills Academy embodies all of this, not only supporting local jobs but giving workers the opportunity to upskill for free and gain valuable experience working on Europe’s biggest infrastructure project.”

The BBV Skills Academy is the first of its kind in the region, but plans are in place to open more centres across the Midlands, making it easier for local people to gain the free training, accreditation and support they need to begin a career on HS2.

BBV estimates it will support circa 7,000 jobs to deliver its programme of work on HS2, and in the West Midlands, it is estimated that the construction of HS2 will generate a constant labour demand of around 10,000 jobs from now until 2027/28.

“At Balfour Beatty VINCI, we remain steadfast in our commitment to providing employment opportunities for people across the region. It is one of our top priorities and a core reason we launched our Skills Academy at South and City College last year.

“We want everyone - particularly those who are currently unemployed – to join us and realise the wide range of benefits that can be derived from a career in the construction and infrastructure industry; careers that will take shape and flourish while working to deliver Britain’s new high-speed railway.”

At the Bordesley Green campus, thanks to BBV’s partnership venture with South and City College Birmingham, students can gain hands on experience in plant machinery operation, traffic and fire marshalling, alongside nationally recognised accreditation from the Construction Skills Certification Scheme.

With no previous experience or skills required, students typically complete BBV’s specialist general operatives training programme in four to six weeks, enabling them to progress onto a paid work trial in their preferred construction career field. On successful completion of the trial, candidates are job matched to roles with BBV’s local labour providers, where they begin their career on HS2.

In a short space of time, the programme has supported people of all ages and backgrounds who were formerly unemployed into work.

René Nunes from Birmingham was unemployed for two years and was eager to find a job that provided long term security. Through HS2’s job brokerage partner model, which sees its contractors work closely with the Department for Work and Pensions (DWP) and National Careers Service to support local people who are out of work into a job on HS2, René was referred to the Skills Academy and onto the general operatives training programme. He is now working full time at HS2’s construction site in Water Orton and is a vital part of the facilities and maintenance team.

“I feel really privileged to have secured this job and to be working on a project of this scale. The sheer size of HS2’s construction programme is phenomenal and it’s great that I get to work at different sites and see it all coming together.

“No two days are the same, which is what I really enjoy about my job, and I genuinely feel part of the team that is bringing HS2 to the region.”

During the visit, guests were invited to meet with former trainees who have transitioned into employment, as well as students who have an expressed an interest in joining the next general operatives training programme.

35-year-old Imran from Sparkbrook in Birmingham lost his job during the pandemic. He’d always been interested in construction, particularly engineering and design. When he was given a flyer advertising the Skills Academy, and its free construction training programme, he jumped at the chance and registered for an induction.

Imran completed his training in just six weeks and  is now working with BBV’s surveying team at the Washwood Heath construction site which will be home to HS2’s train depot and control centre.

“I am passionate and proud to be contributing to HS2’s construction. As a member of the surveying team, I play a vital role in ensuring that designs are delivered to the exact specification and with precision.

I work closely with the designers and engineers and really take pride in my job. Knowing that I am playing a part in the successful delivery of this huge project is really rewarding.”

Cllr Courts, who is also the WMCA portfolio lead for environment, energy and HS2, said:

"With the construction of HS2 and improvements to the wider rail network in the West Midlands, there will never be a better time to get the necessary skills and expertise to build a career in the rail or associated construction industries. The Skills Academy will provide high-quality training to local people of all ages and abilities, from someone new to the industries to someone wanting to advance their career. It will give our local unemployed people a clear route to gaining the skills to work on HS2 now and into the future.”