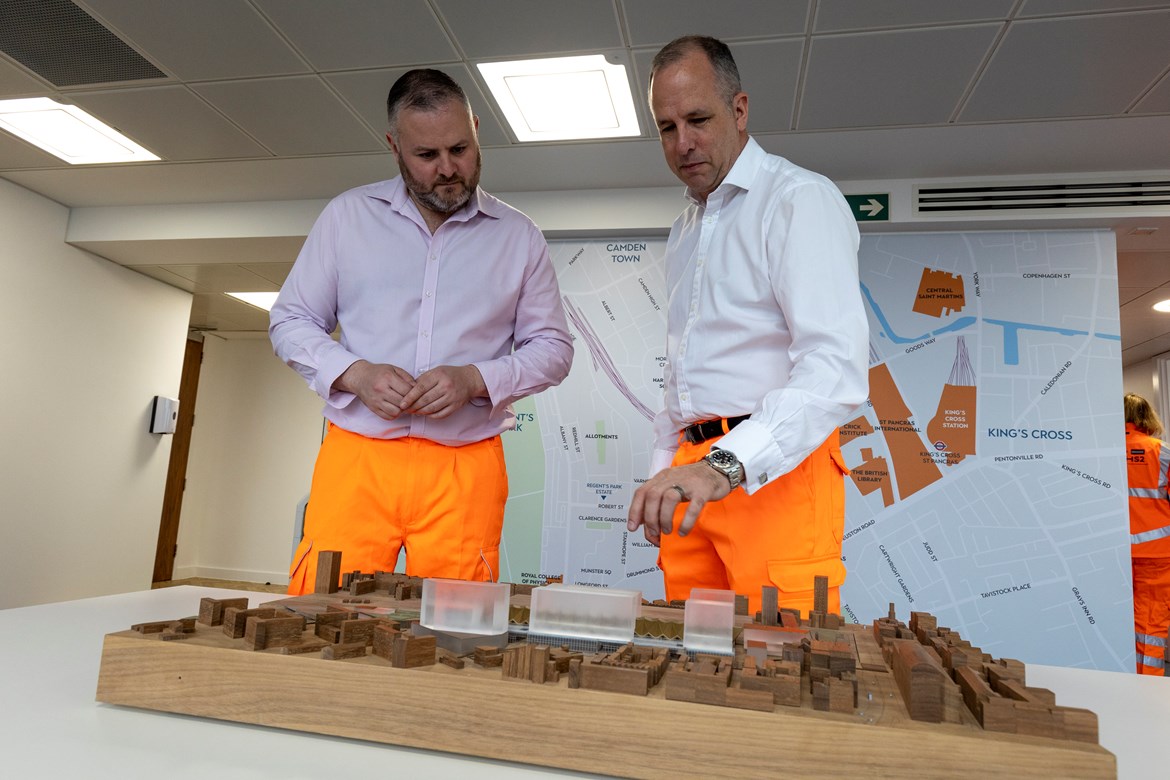 HS2 is set to welcome members of the community, rail passengers, and those who work near Euston station to a series of events where they will hear more about the new station designs, be able to provide feedback on some of the aspects, and learn more about the construction programme.

HS2 revealed brand-new images that show the concept design for the exterior and interior of the station in March. The updated design enables a less complex, more efficient, ten-platform station which can be built in a single stage.

The events include drop-in sessions at local venues, two heritage and design walks around the area and online sessions between Friday 20th May and Tuesday 21st June. As well as CGIs and sketches of the designs, a 1:1000 ratio 3D model of the station will be on display, putting the station in context of the local area. The HS2 Minister, Andrew Stephenson was shown the model on a recent visit to the HS2 Euston station site.

“HS2 is a once in a lifetime project that will be used by millions of people for hundreds of years to come and as we deliver it. It's vital that we work to create spaces and designs which will not only improve the surrounding areas but that the local community can be proud of.

“The public have a unique opportunity to have their say on the design of Euston station and play a first-hand role in the future of this crucial part of Camden.”

The station designs have been drawn up by a design consortium made up of multiple organisations including Arup, WSP, and Grimshaw Architects, working into HS2’s Station Construction Partner, Mace Dragados JV (MDJV). It will feature a bold geometric roof design which will allow natural light to flood into the station concourse, emphasising its north-south alignment. Elements of the innovative roof can be prefabricated off site, and installed using modular construction techniques, reducing costs, carbon emissions and local disruption.

“We want the local community around Euston to be heavily engaged in what we are delivering, and we hope our updated designs and plans will not disappoint. Our series of events are designed to engage, inform and inspire the community with our aspirations, as well as answer any questions they have.

“HS2 arriving at Euston is a transformative opportunity for the area, and we want to work with local stakeholders and partners to create a new piece of the city of London, creating homes, public spaces and thousands of new jobs.”

The design also embeds key elements to improve connectivity around the stations at Euston, including a north-south route through the HS2 station concourse, linked with new public east-west routes that will be provided at an elevated level through the HS2 station. Proposals for future regeneration of the Network Rail station will seek to complete these east-west links, to provide pedestrian connections from Cobourg Street to Eversholt Street. Better connections on the London Underground at Euston and Euston Square will also be delivered. For the first time, tube passengers will have seamless connections between the Northern, Victoria, Circle, Hammersmith and City and Metropolitan Lines at Euston.

The station will now be built in a single stage, reducing the construction period and the impact for the local community and passengers using the existing conventional railway station at Euston. The station will maintain the capacity to run up to 17 trains per hour.  MDJV will carry out the main station construction work. The HS2 station is designed to target a ‘BREEAM outstanding’ rating, an industry recognised standard for buildings that reduce energy usage and materials waste and minimise impact on the natural environment. In addition to an enhanced Euston Square Gardens, HS2 will deliver a major new public green space in the north as well as a community gardens in the west which will be designed to respond to local community needs.

The station design encourages walking and cycling as part of a sustainable transport strategy, providing new cycle routes and 2,000 cycle parking spaces to encourage a safe and active travel environment.

Once works planned at Euston are complete it will not just be a major transport hub, it will be a destination, and one where the local community are an integral part of the development. Through the development, Euston will be a place where existing and new communities will thrive together.

The integration of the stations at Euston will enable the comprehensive transformation of the area by unlocking development above and around the stations and tracks. Lendlease, the Government’s appointed Master Development Partner at Euston, has started an 18-month long public consultation to seek the views of the local community about what would be of value to them in the development.

Following the engagement with the local community, HS2 will be moving forward with the Schedule 17 Planning Application for HS2’s Euston station.