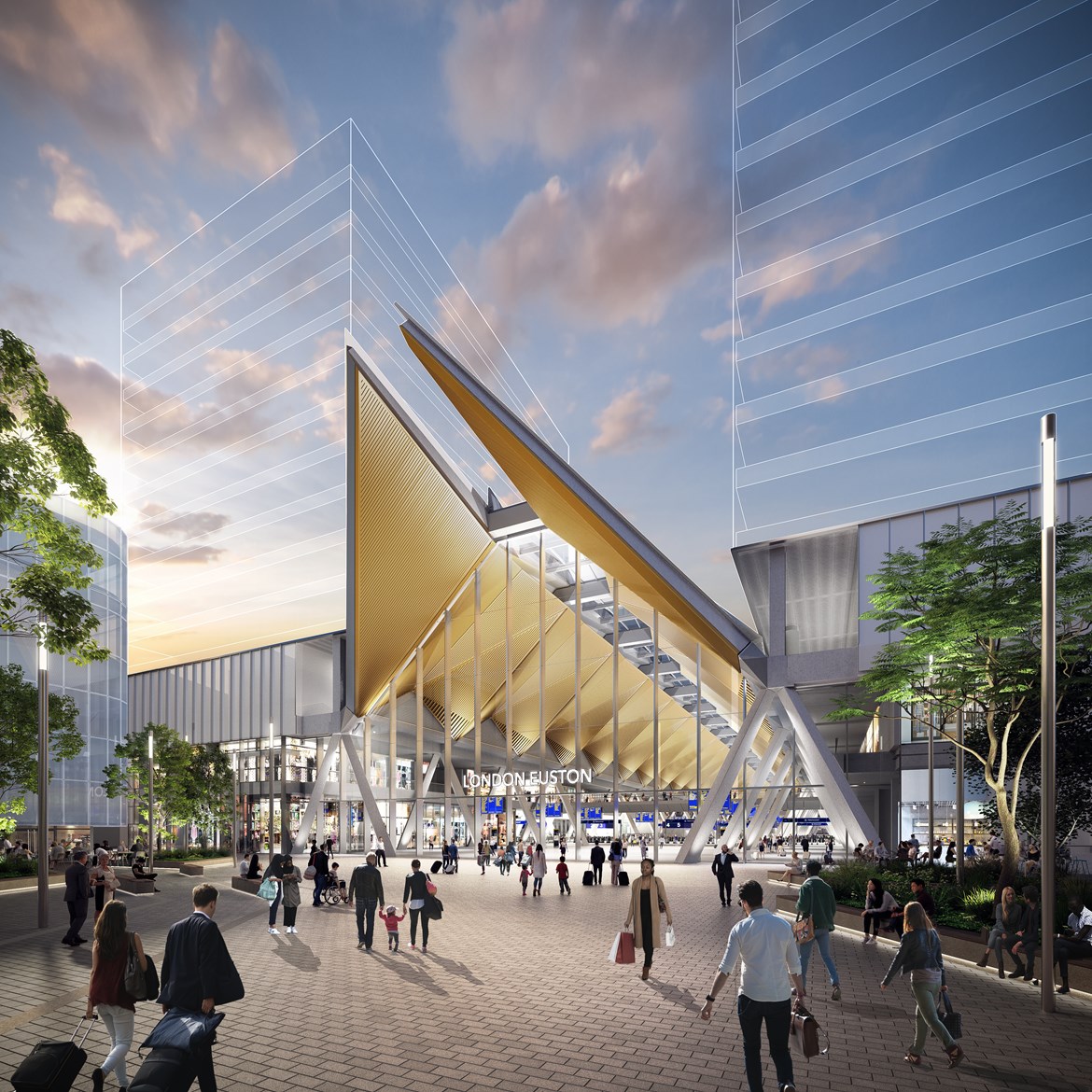 Two brand-new images show the concept design for the exterior and interior of the station. The designs, updated from 2015, are based on a less complex, more efficient, ten-platform station which can now be built in a single stage. They have been drawn up by a design consortium made up of Arup, WSP, Grimshaw Architects, Haptic and and LDA Design, working into HS2’s Station Construction Partner, Mace Dragados JV (MDJV).

“The arrival of HS2 at Euston provides a once in a lifetime opportunity to create an iconic destination in the area, that will help us build back better by growing not just the economy of London but that of the UK.

“This station will not only benefit the local community by enabling the comprehensive redevelopment of the area but will serve as a transport super hub acting as a gateway to the Midlands and the North – enabling us to deliver better railways across the nation sooner than under previous plans.”

Once works planned at Euston are complete it will not just be a major transport hub, it will be a destination, and one where the local community are an integral part of the development. Work planned will enable the creation of new homes (including provision for affordable and social housing), businesses and shops plus improved public realm and open space which will complement what is already great about Euston. Through the development, Euston will be a place where existing and new communities will thrive together.

Construction of the HS2 station will also support 3,000 jobs at peak and will offer hundreds of contract opportunities through the supply chain. MDJV recently began a multi-year procurement of packages worth £500million for work on the HS2 station and the London Underground at Euston and Euston Square which will provide improved connections for passengers.

“HS2’s London Euston station is one of the most complex parts of the HS2 route, situated in a densely populated residential area and adjacent to a busy operational railway. HS2 Ltd is absolutely committed to getting Euston right, engaging with the local community and stakeholders as we continue to progress our designs.

“With the arrival of HS2, Euston is fast becoming one of the largest transport-led regeneration projects of the 21st Century. Across a site of over 60 acres we have the unique opportunity to work with stakeholders and partners to create a new piece of the city creating thousands of jobs, new homes and areas of green public space.”

The station will feature a bold geometric roof design to allow natural light to flood into the station concourse. The roof is an identifying feature of the station and emphasises it’s north-south alignment, and its role as a regional gateway. Elements of the innovative roof can be prefabricated off site, and installed using modular construction techniques, reducing costs, carbon emissions and local disruption.

The HS2 station will be set across three levels, with ten 450m long subsurface platforms, which will at peak operation will be used by up to 17 high speed trains per hour serving destinations in the Midlands and the North. There will be 50,000 high speed train seats over the three hour morning peak.

The ground-level concourse will be 300m long and will allow free movement for both passengers and visitors through the station and will open out onto new public spaces at the north and south. The station hall – 20% larger than Trafalgar Square – will become the largest station concourse in the UK.  Retail and station facilities will be available on the ground and first floor, underneath the dramatic top-lit station roof.

“The scale of the new HS2 London Euston station means we have the opportunity to create a new truly public civic space for London, a place that responds to transport and passenger needs and becomes part of the existing urban fabric and community. The 300-metre long station hall sits at the heart of this approach, creating a space that is permeable, accessible and open and connects to the local streets and neighbourhoods through green, pedestrian-oriented spaces.”

The design reduces the ticketed area of the station by placing platforms and trains below ground, so the station hall can function as a public, sheltered north-south route linking Euston Road and Bloomsbury to Hampstead Road and Camden Town. The north-south route will link with new public east-west routes that will be provided through the HS2 station roof once future regeneration of the Network Rail station is complete.

In addition to an enhanced Euston Square Gardens, the station will deliver a major new public green space in the north as well as a community gardens in the west which will be designed to respond to local community needs. The station design will encourage walking and cycling as part of a sustainable transport strategy, providing new cycle routes and 2,000 cycle parking spaces to encourage a safe and active travel environment.

The station will now be built in a single stage, reducing the construction period and the impact for the local community and passengers using the existing conventional railway station at Euston. The station will maintain the capacity to run up to 17 trains per hour.  MDJV will carry out the main station construction work.

The new station will bring huge improvements for passengers using the London underground at Euston. There will be a brand-new ticket hall with direct connections to Euston Square station and from HS2 platforms. For the first time, tube passengers will have seamless connections between the Northern, Victoria, Circle, Hammersmith and City and Metropolitan Lines at Euston. Both the HS2 station and London Underground station will have fully accessible step free access from street to train.

Taking account of the recommendations of the independent Oakervee review, the design integrates the HS2 station with the existing Network Rail station and emerging plans for over site development, led by Lendlease. Network Rail is creating plans to redevelop and integrate the existing Euston station, serving the West Coast mainline, alongside the HS2 terminus. Together, these two stations will help to unlock much needed capacity for passenger services, transform passenger experience and offer improved connectivity to the major cities and knowledge centres across the UK.

The integration of the stations at Euston will enable the comprehensive transformation of the area by unlocking development above and around the stations and tracks. Lendlease, the Government’s appointed Master Development Partner at Euston, has started an 18-month long public consultation to seek the views of the local community about what would be of value to them in the development.

The HS2 station is designed to target a ‘BREEAM outstanding’ rating which is an industry recognised standard for buildings that reduce energy usage and materials waste and minimise impact on the natural environment.

HS2 will be holding a number of engagement sessions to showcase the new design to members of the local community and passengers during May and June this year. For more information about these events please visit hs2.org.uk/Camden