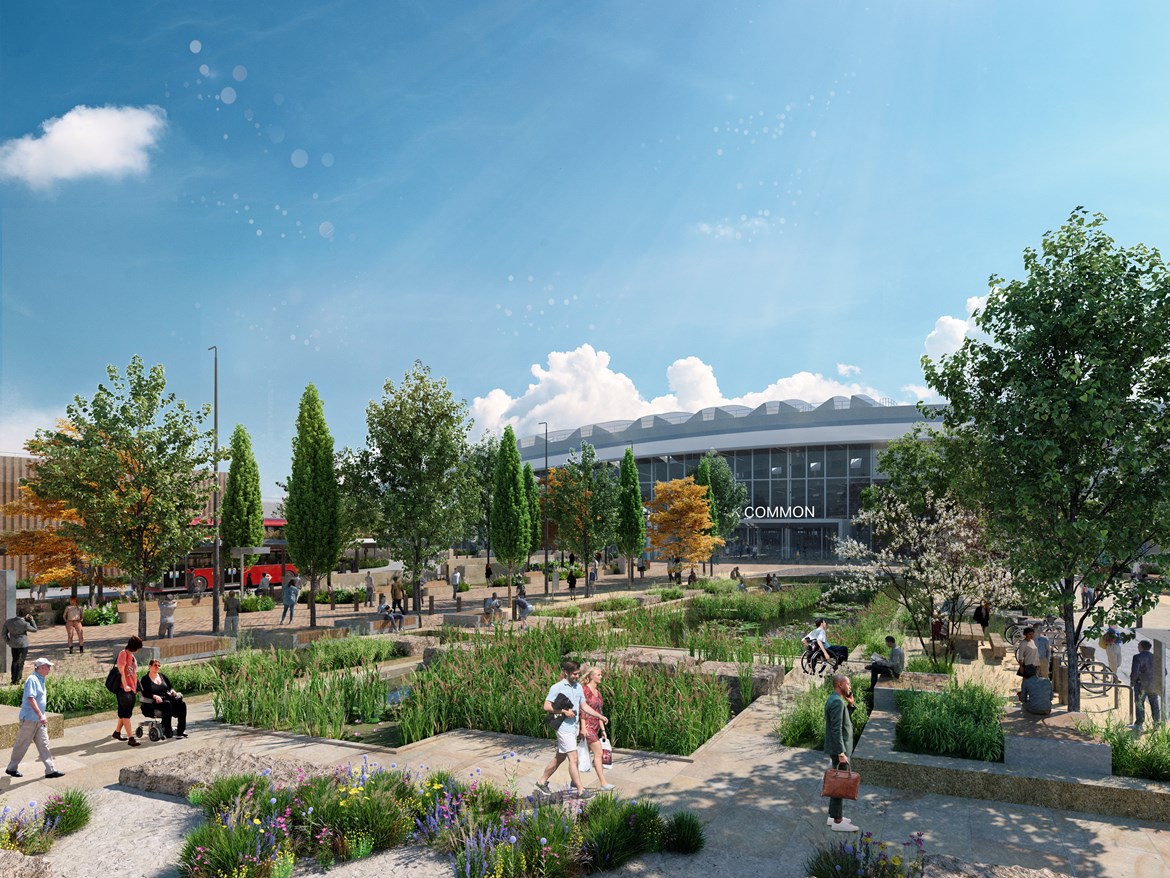 The local community and businesses are being asked for their feedback on the designs before a planning application is submitted. The ‘super-hub’ station has already received planning approval, and permanent construction began last month, with the Transport Secretary giving work the green light.

Once complete, the HS2 station will offer unrivalled connectivity, with fourteen new platforms; six HS2 platforms offering high speed services to the North and Midlands, four Crossrail – or Elizabeth Line – platforms, and four conventional rail platforms, which will be served by trains to Wales and the South West. Over 2,300 jobs will be supported by the construction of the new station, with over 200 apprentices. HS2 has also revealed today that 650 apprentices are now working across the whole HS2 project.

“Building back better is not just about delivering once-in-a-generation projects like HS2. It is about using our investment to fire up innovation, create new skilled jobs, and lay the foundations for a thriving, green, sustainable economy for the future.

“At Old Oak Common, we’re not just building a world-class transport hub, but supporting one of the largest regeneration projects in the UK – aiming to deliver 56,000 jobs over the next 30 years as part of the Government’s Plan for Jobs.”

The proposals revealed today include the creation of a new public parkland that can be enjoyed by local residents, workers and rail users. It will be accessible via Old Oak Common Lane and will be formed of pocket gardens, tree and shrub planting, and a viewing platform over the small wetland area and station plaza. The new park will be a destination for people to relax as well as a venue for events, and pop-up markets.

The park will also offer a wide range of seating, including benches, low walls, chairs and tables. There will also be provision for public art and visual installations which will animate and reinvigorate the park long into the future.

“HS2 will not only be improving rail journeys across the UK; we will also be regenerating areas around our stations. The proposed designs for the urban space around the station will provide a new vibrant public area where the local community, station users and workers can relax. With up to 250,000 passengers set to use this vital transport hub every day, it is vital local people get involved to help us refine our plans.”

Disability access has been at the heart of the plans right from the start and the proposals include step free access across the main paths in the park. There will also be resting spaces for wheelchair users and accessible seating across the area.

A Wetland Common at the front of the station also forms part of the proposals, which will be an area rich in biodiversity, and be a pleasant, safe environment for everyone – from children playing, friends relaxing or passengers waiting for a train or a bus. There will be a diverse range of planting species and mature trees, creating a unique place to be enjoyed all year round.

Local residents will also be asked to feedback on transport plans for access to the station including an area for private car drop off at the station, taxi rank, bus depot with green-roofed shelters and indoor bicycle parking with wide cycle paths.

The plans have been developed by HS2’s station construction partner, Balfour Beatty VINCI SYSTRA (BBVS JV) and their design contractor WSP. Following the approval for the station building design from the planning authority, Old Oak and Park Royal Development Corporation (OPDC), in May 2020, the new urban realm proposals are the next step in showcasing how the arrival of HS2 will reinvigorate the surrounding area.

“The urban realm has been designed to provide a real sense of place for the station and the Old Oak Common Community. Its design is underpinned by the cultural and ecological connections of the area, providing for one of London’s biggest and intensively green new urban parklands aligned to the Design Vision of all stakeholders. WSP has worked closely with our architects WilkinsonEyre and landscape architects Grant Associates, HS2 and OPDC to create an extensive parkland area and integrated transportation interchange extending over four hectares of urban realm surrounding the station.”

Following a four week engagement period to take feedback on the designs, a planning application will be made to the OPDC. There are also plans from OPDC to transform the wider area, a former railway and industrial site, creating tens of thousands of jobs and new homes.

“It’s great to see the start of community engagement for these major plans. We’ve worked closely with HS2 to make sure that the public space around this major transport interchange is green, accessible and of a high-quality, befitting of its setting at the heart of the capital’s largest regeneration scheme. It’s vital that the station’s surroundings are of an exceptional standard and support our plans to deliver tens of thousands of new and affordable homes and jobs, to truly maximise benefits to the public. We will determine the application in due course, taking into account the public’s feedback.”

The local community can provide feedback on the designs by 6th August and two webinar sessions are taking place where experts will be available to take questions on the designs.